A Pineapple Is An Apple (Kind Of)

How did this tropical fruit get tied to the apple?

The delicious pineapple probably seems very removed from the more common apple or the pinecone to the modern fruit consumer. Yet, dating to the late 14th century, the cone, which is the seed-bearing fruit of the pine tree, was the first fruit to be called pineapple. It was so-named from the practice of medieval botanists to refer to any unfamiliar fruit on a tree that was thought to resemble the firm, roundish apple in some way by the name apple. If the pinecone used to be called a pineapple, what did they call the pineapple? First, let's take a step back. 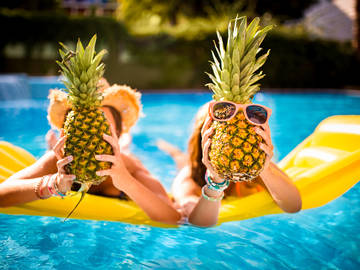 A pair of friendly pineapples.

The nomenclatural practice of using apple for foreign fruits, as well as nuts and vegetables, traces back to ancient times. In Latin, for example, a peach was called persicum, meaning "Persian apple," and a pomegranate was called pōmum grānātum, "an apple with many seeds." Influenced by this naming practice, English speakers nicknamed the tomato and eggplant love apple, from their supposed aphrodisiac qualities; in addition, there is cashew apple (the pear-shaped edible receptacle on which the cashew nut is borne), earth apple (a potato or Jerusalem artichoke), custard apple (the papaya), and thorn apple (the fruit of a hawthorn), among others.

The modern name of the pine tree's fruit, which we use without hesitation today because of the apt reference to its cone shape, did not come together until the adoption of Greek kōnos—in its senses for both a geometrical figure and the fruit—in the mid-1500s. In botany, cone was applied as a term for the fruit of the pine and fir tree. By the 18th-century, the word became the generally-accepted substitute for apple in the name of the pine tree's fruit, giving us the familiar, straightforward pinecone.

Prior to the supplanting of pineapple by pinecone, the word pineapple formed new roots in the English language as the name for the sweet, juicy fruit of a tropical plant that we now enjoy in its natural form and in various sweet culinary creations. English explorer Captain John Smith was one of the earliest to record the word for the tropical fruit in 1624. It may be that Smith recalled the things that grew on pine trees when he saw the fruit, but more than likely it was so-named by the practice of calling a newly-encountered fruit apple. The captain was obviously unaware of the name ananas for the fruit, which was already in use in English at the time.

Of their fruits Ananas is reckoned one of the best: In taste like an Apricocke, in shew a farre off like an Artichoke, but without prickles, very sweet of sent.
— Samuel Purchas, Purchas his pilgrimage, 1613

The term fell into general disuse by the late 19th century—but only in the English language. Ananas, or a variant thereof, is used in many languages today for the pineapple. And in case it crossed your mind, it is unrelated to banana. However, the banana shares something in common with the pineapple and pinecone: it has been referred to as an apple.