The history of a word you'll need this holiday weekend

The word patriot signifies a person who loves his or her country and is ready to boldly support and defend it. That meaning has endured since the word's arrival in English in the 16th century, but it has not marched through the years unchallenged. 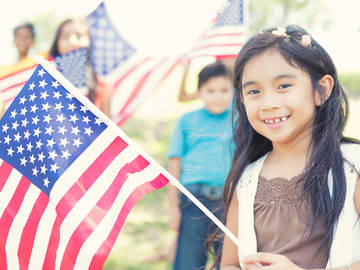 A young patriot at work.

Ultimately derived from Greek patrios, meaning "of one’s father," patriot entered English via French patriote—meaning "fellow countryman" or "compatriot"—during a time of political unrest in Western Europe that was characterized by infighting among fellow countrymen—especially among those of the Protestant and Catholic faiths.

The effects of religious and political schism became manifest in the use of the word patriot. Early evidence shows the word as being modified by commendatory adjectives, such as good, to distinguish fellow patriots who shared both a love of their country and a common allegiance from those having opposing beliefs and loyalties.

… when any good patriote which in some high place like a strong pillar opposes the corruptions and popery of the times … is taken away; that we take it to heart…."
— Robert Bolton, The Four Last Things, 1631

You may let him know what a good patriote his father was, and what honor this Colonel hath gained by holding oute the siege at Warder Castle after halfe of it was blowen up.
— Arthur Hesilrige, letter, 12 May 1645

The Catholiques were knowne good Patriots under our former Kings.
— Henry Hammond, A view of some exceptions which have been made by a Romanist to the Lord Viscount Falkland's discourse…, 1646

Use of the word to mean "good patriot" without modification became more frequent by the end of the 17th century, but it tended to apply to a supporter of the ruling monarchy.

A Patriot, both the King and Country serves; Prerogative, and Privilege preserves.
— John Dryden, Fables, Ancient and Modern, 1700

Another effect of the tumultuous times was the development of a derogatory use of patriot. The term was assumed by people who claimed devotion to one's country and government but whose actions or beliefs belied such devotion. This ultimately led to the discrediting of the loyalty and steadfastness associated with the word patriot. As English lexicographer Samuel Johnson noted, the word became used "ironically for a factious disturber of the government." English poet John Dryden applied the word disparagingly in his 1681 political satire Absalom and Achitophel.

Gull'd with a Patriots name, whose Modern sense Is one that would by Law destroy his Prince: The Peoples Brave, the Politicians Tool; Never was Patriot yet, but was a Fool.

The years leading up to the American Revolutionary War further propagated the notion of patriot as a name for a seditious rebel against the monarchy. 18th-century American writers, however, heartily embraced the word to define the colonists who took action against British control. As tensions continued to escalate, a new meaning of patriot came to the forefront: "a person who advocates or promotes the independence of his native soil or people from the country or union of countries of which it is a colony." Benjamin Franklin provides an early record of this use.

It should be no Wonder … if among so many Thousand true Patriots as New England contains there should be found even Twelve Judases.
— Benjamin Franklin, letter, 7 July 1773

In the end, the patriots won the war and, centuries after America’s Declaration of Independence, patriot has held its place of honor in the English language as the meritorious name for the brave men and women of the armed forces who defend the rights and freedoms of their country. Stripped of all past disparagement, the word has returned to its original meaning: "one who loves his or her country."

Today, active fighting or resistance is not a requirement to being a patriot: a person only needs a strong sense of love for one’s country.