The Questionable Origin of 'Quiz'

A tall tale and a word history with supporting quotes.

The origin of quiz is not known for certain. One popular story relates it to a wager made by an 18th-century theater manager, but its meaning and usage have changed over time. Originally, quiz described an eccentric person or thing. Later it meant "to make fun of" or "one who mocks." In the 19th century it began to take on its familiar senses referring to tests or questions both in and out of the classroom. 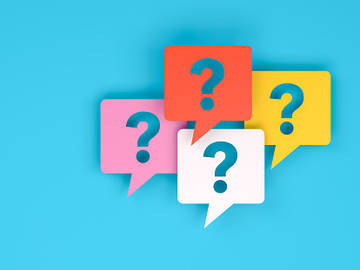 The question of where quiz comes from doesn't have an answer that we feel confident about. But there is a tale to tell to entertain the inquisitive. A popular origin story, as recorded in an 1856 issue of the British periodical The Ladies' Repository, goes as follows:

QUIZ—This word is said to have originated in a joke. Daly, the manager of a Dublin play-house, wagered that he would make a word of no meaning to be the common talk of the city in twenty-four hours; in the course of that time the letters q, u, i, z, were chalked or pasted on the walls of Dublin, with such an effect that the wager was won. It came, therefore, to signify an odd fellow, or a joker; but it is only used in colloquial, or vulgar language.

There are a few versions (that fact alone raises suspicion for etymologists) of this anecdote on the origin of quiz that were once widely circulated in various publications. Print evidence of the noun quiz does date to the late 1700s and Daly—a Richard Daly—was, indeed, an Irish theater manager at the time, but no evidence has surfaced confirming the related events.

Although we are unable to account for the origin of quiz, we can answer to its usage. The noun quiz is first used with the meaning "an eccentric person or thing," a slangy sense that, while not obsolete, is rarely used today but preserved in literary works.

He was not odd—no quiz—yet he resembled no one else I had ever seen before.
— Charlotte Brontë, The Professor, 1857

Where did you get that quiz of a hat? It makes you look like an old witch.
— Jane Austen, Northanger Abbey, 1817

This sense of quiz also survives in the adjective quizzical, which can mean "eccentric," "odd," or "whimsical."

In Da Vinci's Demons, Leonardo is hardly that quizzical old chap depicted in his purported self-portrait with the long, wavy white beard, horizontal eyebrows and tired eyes. Here he is depicted in his vividly imagined youth, not only as an artist and inventor but as a flashy ambidextrous swordsman, lover, and free-thinker with talents that are almost superhuman. It premieres here on Foxtel's FX channel this week and is screening close behind each episode's first airing in the US.
— Graeme Blundell, The Australian, 13 Apr. 2013

Quizzical is also used to describe mild teasing, bantering, or mocking ("a quizzical remark") and something, such as a raised eyebrow, expressive of puzzlement, curiosity, or disbelief.

Another tidbit of trivia: Quoz is a word for an odd person or thing that was used especially during the 18th and 19th centuries. Although it resembles quiz, it has not been determined if it is an alteration; however, quoz is considered a synonym of quiz.

"Upon my honour," cried Lynmere, piqued, "the quoz of the present season are beyond what a man could have hoped to see!" "Quoz! what's quoz, nephew?" "Why it's a thing there's no explaining to you sort of gentlemen; and sometimes we say quiz, my good sir." Sir Hugh … felt seriously affronted. His utmost lenity could not palliate the wilful disrespect of this language; and, with a look of grave displeasure, he answered, "Really, nephew, I can't but say, I think you've got rather a particular odd way of speaking to persons. As to talking so much about people's being old, you'd do well to consider that's no fault in anybody; except one's years, which is what we can't be said to help."
— Fanny Burney, Camilla, 1796

The earliest sense of the verb quiz, "to make fun of" or "to mock," is also attested in the late 18th century.

There was a monstrous deal of stupid quizzing and common-place nonsense talked, but scarcely any wit; all that bordered on it, or on sense came from my cousin George, whom altogether I like very well.
— Jane Austen, letter, 21 Apr. 1805

Quiz, as a noun, was, in quick time, applied to a person who makes fun of or mocks another as well as to a practical joke.

"For goodness sake, Mrs. Todgers," interposed the lively Merry, "don't call him a gentleman. My dear Cherry, Pinch a gentleman! The idea!" "What a wicked girl you are!" cried Mrs. Todgers, embracing her with great affection. "You're quite a quiz I do declare!"
— Charles Dickens, Martin Chuzzlewit, 1844

Lastly, my fair correspondent insisted I … would be much profited by going shares in a patent medicine which she had invented for the benefit of little babes. I dreaded to have any thing to do with such a Herod-like affair, and begged to decline the honour of her correspondence in future. I should have thought the thing a quiz, but that the novel was real and substantial.
— Sir Walter Scott, diary, 11 Feb. 1826

The senses of quiz that are now most familiar appear to have developed from the verb, perhaps with some influence from words like question and inquisitive. The verb sense "to question closely" (as in "he was quizzed on his knowledge of baseball history") and the related noun sense "a brief oral or written test" popped up in the 19th century, but teachers didn't begin popping pop quizzes until next century to make sure their students were doing their homework. Quiz can also mean "to look at inquisitively."

This is the gentleman who once actually sent a messenger up to the Strangers' gallery in the old House of Commons, to inquire the name of an individual who was using an eye-glass, in order that he might complain to the Speaker that the person in question was quizzing him!
— Charles Dickens, Sketches by Boz, 1836

The "eye-glass" in the quote might also be a type of quizzing glass, an eyeglass but particularly a monocle for looking, or spying.

In the classroom, there are correct answers to a quiz, but a quiz can also be a simple series of questions without right or wrong answers to determine something, such as personality or preference. The idea of making a quiz into a form of entertainment that tests a person's general knowledge by answering questions correctly was realized in the early 20th century. The following is a lengthy quote, but it is worth reading—it contains trivial history that might be useful for quizzes.

Quiz shows went through a process of evolution. As far back as 1928 there was a quiz show of a sort in a question-and-answer program called "Jack Says: Ask Me Another." This, sponsored by a Hartford, Conn., tire distributor, is credited by some as the granddaddy of quiz shows. However, it was just broadcast locally. Four years later a new wrinkle in radio was heard over a Houston station. This program took a microphone out of the studio and asked questions of the man in the street. The program, supplying another of the elements of the modern quiz show, was called "Vox Pop." In 1935 it "went network." However, it was not till the late thirties that question-and-answer shows were going great guns on national networks. A significant step was taken in 1938 when "Information Please" went on the air. This show provided a variation on a theme which many listeners had found irritating—the smug, know-it-all quiz-master who knew all the answers (since they were written on cards held in his hand!). This program, which made John Kieran a national figure, put the experts on the spot. But more important it gave away things, encyclopedias, to be exact. Not long afterward there were variations, notably the "Quiz Kids," while still other innovations were popping up. To freshen your memory, Uncle Jim was conducting his question bee, people who couldn't tell the truth were paying horrible consequences, and Phil Baker was bringing to the language a phrase, "the $64 question."
— The American Legion, May 1949

Quizzes are still popular at school, online, on television, in magazines, and at the bar or pub. Questions are asked and questions are answered, except for "Where did the word quiz come from?"