If you've seen the "flight" option on a menu at a brewery, pub, or restaurant and you're not a beer or wine (or food) connoisseur, the concept of ordering a "flight" might initially strike you as odd. But really it's not: simply put, a flight is an order of samplings or tastings of selected beverages or food items that is served on a wooden board or in a specially designed carrier.

Wine and beer flights are common among sit-down establishments, but now operators are taking flights to food, offering a sampling of several varieties of a single item.
— Lizzy Freier, Restaurant Business, 7 Apr. 2017

And even if you're familiar with such flights, there's a chance you aren't completely sure on how that sense of the word landed in the English language. We're here to give you food for thought. 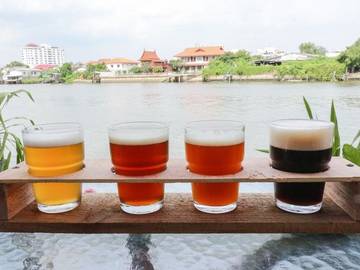 Just remember to tip your waitstaff.

There are several senses of the word flight, and the one connected to beverage and food tastings is derived from the sense of "a group of similar beings or objects flying through the air together," which was incubated in the nest of Old English flyht—itself related to flēogan, the Old English verb meaning "to fly through the air." Although the modern English verb fly can mean "to move in or pass through the air" and also "to run away" (a meaning developed from the swiftness of flying creatures and objects), etymologically, the noun flight referring to the act of fleeing on foot is unrelated to the one in the sky; rather, it is from the Old English verb flēon, of the same meaning.

The concept of human flight through the air—as by a hot air balloon, for instance—takes flight in the 18th century—though people were figuratively experiencing "flights" of imagination and fancy since the latter half of the 17th and were considered "flighty" slightly before modern aviation.

These were men of high flight and above ordinances, and spake spiteful things of our Lord's Nativity.
— The Diary of John Evelyn, 1657

Prior to that accomplishment, flight referred to a series of stairs between landings, a meaning adopted into French as volée, which also denotes a volley of missiles or a flock or flight of birds in that language. (Some viewers of the horror franchise Final Destination might recognize volée as the name of an airline in the films.) That sense originates from the notion of a group of stairs allowing for the vertical movement through space (away from the Earth's surface) from one floor to the next or from one "landing" to another. A related sense of the verb fly was grounded in English slightly earlier—in the late 17th-century—and meant "to descend or ascend with change of direction." That sense has since fallen into disuse.

The stairs … sometimes wind, and sometimes fly off from that winding.
— Joseph Moxon, Mechanick Exercises, 1679

Flight as used for a collection of things flying in or passing through the air together (such as birds and insects as well as angels and arrows) goes back to early medieval times. Shakespearians might recall that Horatio says farewell to Hamlet with the words "Good night, sweet prince, / And flights of angels sing thee to thy rest!" Centuries later, during World War I, the aerial branch of an army was organized into "wings" that were divided into "squadrons" and then subdivided into "flights." It is from such use in regard to groupings that people, during the latter half of the 20th century, began to associate flight with a sampling or tasting of a selected group of beverages or food items that are flown in by a server.