We interpret the history and significance of the word.

Dream in Old English referred to auditory or emotional sensations experienced while awake; it's thanks to the influence of Old Norse that the word came to refer to the mental visions and sensations experienced during sleep instead. Dream later expanded to refer to "blissful awakened states," "strong desires," "imagined fantasies," and to be paired with other words (as in American Dream). Dream is of course also a verb wherein one can dream, dream of, dream up, or dream on. 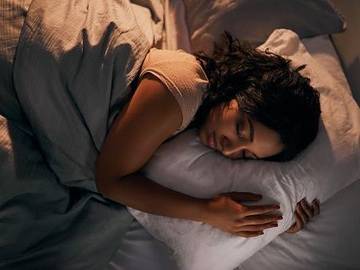 To sleep, perchance to learn a word history

Old English drēam had a different meaning than the dream of today that is used in reference to neuronal activity during sleep or semiconscious wakefulness: it referred to things causing auditory or emotional sensations experienced while fully awake. Drēam in fact meant "noise," "joy," or "music." In the 13th century, the word began to be used in the now-familiar sleep-related senses, but not because of some specialized sense of the older word. Etymologists believe that the change in meaning was from an outside influence: it appears that after many Scandinavian conflicts, conquests, and settlements in Britain, Old Norse draumr, itself having the meaning of our modern word dream—“a series of thoughts, images, or emotions occurring during sleep”—influenced the meaning of English word. Eventually, the earlier "noisy" meaning quieted as the new dream, relating to mental visions, awakened.

In Middle English, dream started to be used to refer to an experience occurring while awake that has the characteristics of a dream in sleep, or for an awakened state of mind but one distracted from reality in some way ("She lives in a dream, oblivious of all practical concerns"; "After they kissed, he strolled away in a dream"). Dream then came to refer specifically to an imagined vision or fantasy indulged in reverie or daydreaming, as in "The future is built on the dreams of the youth" or "The student began to zone out during the lecture on Buddhism and had a dream in which he met the Dalai Lama." The noun dream can also designate something or someone that is ideal or strongly desired or hoped for—for example, "The island is a beach lover's dream"; "The car is a dream to drive"; "She fulfilled her dream of becoming a doctor"; "Making it to the Olympics was a dream come true." This sense is often used attributively, as in "a dream vacation/house/job" or "a legal dream team."

There are also derivative dream terms, such as pipe dream and the American dream, having distinct meanings. A pipe dream is "an illusory or fantastic plan, hope, or story" (in other words, something that is impossible to achieve or is simply not practical).

On a large scale, people aren't going to cut back how much they use. That's a pipe dream. If anything, as the developing world gets richer, the world’s going to consume more—more cars, bigger homes, more energy, more water, more food.
— Ramez Naam, quoted in Forbes, 17 Apr. 2013

Pipe dream is American in origin and dates to the late 19th century. The pipe element refers to an opium pipe, and the dream element to the drug-induced fantasies brought about by the smoking of opium.

The American dream was popularized in the 20th century and signifies an American social ideal that stresses egalitarianism and advocates the right of every citizen of the United States to be allowed an equal opportunity to achieve success and material prosperity through initiative and hard work. This use of dream was born in the 18th century to denote a way of life considered ideal by a particular nation or group of people. It usually precedes a modifying adjective, as in "the Russian/Australian dream" or "the imperial dream of power" (or "the American dream"). Here is an example which gives insights as to what such dreams are made of:

We are learning that the Chinese dream is very different than what many observers expected just a few years ago. On the one hand, Beijing is a sophisticated international capital where Chinese artists, art lovers, and expats gathered Sunday at a fund-raising gala at the Ullens Center for Contemporary Art, a venue that recently hosted a major Picasso exhibition. It is also home to elite universities where students and young people I met were mostly optimistic about their future. Fiddling with cell phones, this e-commerce generation orders up virtually their whole life from mega apps like WeChat. Or lifestyle apps like Meituan Dianping, the national meal delivery app that delivers fresh groceries anywhere in 30 minutes and just marked a high of 30 million orders in one day.
— Trudy Rubin, The Philadelphia Inquirer, 7 Nov. 2019

American clergyman and civil rights leader Martin Luther King, Jr., famously evokes this dream in his "I Have a Dream" speech—delivered on August 28, 1963 during the March on Washington, which was a call for racial equality and freedom. King also powerfully uses dream in his speech to emphasize his goals and aspirations, the attainments of which are ardently desired and longed for.

I say to you today, my friends, so even though we face the difficulties of today and tomorrow, I still have a dream. It is a dream deeply rooted in the American dream.… I have a dream that my four little children will one day live in a nation where they will not be judged by the color of their skin but by the content of their character. I have a dream that … one day right there in Alabama, little black boys and black girls will be able to join hands with little white boys and white girls as sisters and brothers.

'Dreaming' as a Verb

The verb dream, meaning "to have a dream (of) in sleep," originated in early Middle English. Earlier use follows the history of the noun. It traces to Old English with the meanings "to rejoice," "to sing," or "to make music," all of which were quieted as the verbal homograph developed semantically. Eventually, the verb came to refer to activity of the mind passing time in idle daydreaming or reverie or in hopeful and wishful thought. In any case, when "dreaming," things not yet conceived, invented, or imagined are often "dreamed of," and anything "dreamed of" can be, with effort and resilience, realized. The phrase dream of denotes the act of thinking of something as being true or possible, fitting, or proper, but its usage is often used in negative constructions, as in "I never dreamed of acting on Broadway" or "I wouldn't dream of hurting anybody."

The imperative phrase dream on—which is often used informally to say that you do not think something that another person wants or expects will ever happen (take, for instance, this exchange: "I think my band will be famous one day." "Dream on.")—is first recorded in the 18th century. Similar phrasings are "keep on dreaming" or "in your dreams," both of which suggest something is highly improbable or has no chance or hope of happening. Another common verbal phrase is dream up, meaning "to form or think of in the mind"; synonyms are invent, devise, and concoct, as in "He dreamed up a solution to the problem."

For the record, we never in our wildest dreams would have dreamed up this history of dream. It is based on word usage. Sweet dreams. And, keep in mind, there are other dream words to dream of, such as dreamboat. How exactly did a "boat" come to refer to a person who is very attractive anyways? That's a question for another voyage.