A word for a messenger (hopefully bringing good news)

Angel derives from the Greek angelos, a translation of a Hebrew word meaning "messenger." Angels are considered the lowest of the nine orders in Christian celestial hierarchy and also appear in Islamic and Judaic tradition. 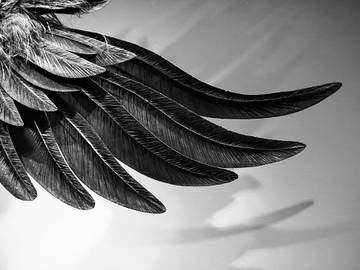 Noah Webster in his 1828 An American Dictionary of the English Language defined angel, firstly, as "a messenger," and then followed with senses conveying "a spirit" (good or bad) and a person "who is an embassador of God" or "whom God employs to execute his judgments." He wasn't wrong in beginning with the "messenger" sense since angel comes from Greek angelos, a translation of a Hebrew word meaning "messenger," and was used secularly and spiritually in that sense since its manifestation in Old English and onward.

"Enlightened" stars co-creator Lauren Dern as Amy Jellicoe, who learned how to meditate in rehab, but after returning to her life, has trouble keeping her equilibrium. In season two, in her attempt to become an angel of change and make her mark on the world, she tries to take down the corporation where she works.
— David Bianculli, NPR, 9 Aug 2013

The dual uses of the word were not overlooked by poets either: the English dramatist Ben Jonson, for example, spoke of the nightingale as being "the dear good angel of the Spring."

Although spiritual beings superior to humans in power and intelligence, angels, being mere messengers, are ranked lowest in the traditional Christian celestial hierarchy, which has nine orders: from lowest to highest, angels, archangels, principalities, powers, virtues, dominions, thrones, cherubim, and seraphim. New York Times writer Joe Sharkey creatively alludes to the hierarchy in writing about the order of boarding an airplane in a November 2011 article:

Boarding with a coach ticket, bereft of status, is an exercise in knowing one's humble place these days. You wait there, listening to the gate agent summoning the ranks into formation, starting with first class, working through the elite-status levels, then to the travelers holding various airline-branded credit cards. Medieval theologians who devised the ranks of heavenly hosts in the Celestial Hierarchy—seraphim and cherubim first, common angels last—used a simpler formula.

Angels, archangels, cherubim, and seraphim go back to Judaic tradition. The cherubim and seraphim are mentioned in the Old Testament as being the guardians of the throne of God. In later Judaism, seven archangels are held to lead the countless other hosts of heaven. The archangels are Uriel, Sariel, Remiel or Jeremiel, Raguel, Michael, Gabriel, and Raphael. The latter three are well-known in Roman Catholic and Eastern Orthodox devotion. The five other angelic orders that make up the traditional celestial hierarchy were added in early Christianity.

A hierarchy of angels also developed in Islam. In addition to four archangels (of which Gabriel, or Jibril, and Michael, or Mikal, are two) and cherubim, the Islamic tradition includes in its hierarchy the four throne bearers of Allah and various lesser angels.

Although low in the hierarchy, angels are believed to be the intermediaries between the divine and human realms—not an easy task—and, in some cases, they are assigned as guardians of humans by the Almighty.

Use of the term angel designating a person who is felt to resemble the divine creature (as in innocence or beauty) dates to the 15th century, but it was used in metaphorical phrases prior to that. It was in the late 19th century that angel began being applied to people who provide financial backing to new businesses or enterprises, used specifically in the appellations "business angel" and "angel investor."

Two years ago, one of the book's authors was involved with an Internet start-up that (through a lucky turn of events) received an initial $100,000 investment from the father of one of the firm's lawyers—a business angel living temporarily in the Far East. ... Since that investment, another business angel has invested $300,000, and the firm is now in the process of raising at least $5 million in venture capital.
— Mark Van Osnabrugge and Robert J. Robinson, Angel Investing, 2000

If you find this kind of angel, we suggest you hold onto them.