Are you reading this on a screen? Are you looking down as you do so? Ah, yes: many of you are. We thought so. And is this position also the one you take when consuming less edifying (though surely no less entertaining) reading material? And when binge-watching whatever it is people are binge-watching these days? And perhaps too when watching some sort of sporting event? Mm-hmm. Just as we suspected.

Well, our 19th century forebears did not look down so often for their entertainment, we can tell you that. In fact, in the mid-19th century they were given good reason to turn their eyes upward. 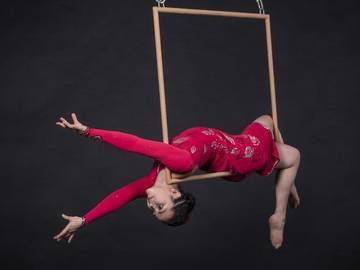 In the year 1859 the Frenchman Jules Léotard invented the flying trapeze, and happenings at heights suddenly became more interesting. (And yes, we also have Monsieur Léotard to thank for the close-fitting one piece garment that bears his name.) While the circus in its modern form had been around since the mid-18th century, the invention of the flying trapeze introduced new aerial acts—and gave a boost to the vocabulary used to discuss it. The English word acrobat preceded Léotard's trapeze—current evidence dates it to 1827—but acrobat began a steep climb in popularity in the wake of the invention.

Like Léotard himself, the word acrobat is French in origin. The French word, however, was borrowed from Greek—specifically the Middle Greek word akrobátēs, meaning "tightrope walker," which itself is derived from akróbatos, meaning "walking on tiptoe." The akro- is from Greek ákros, meaning "at the farthest extreme, topmost" (we see its descendant also in the word acrophobia, meaning "fear of heights"); the batos is from baínein, meaning "to walk, go."

As the Greek antecedent of the French word makes clear, impressive circusy feats were not invented in the 19th century. Ropedancing, which involves dancing, walking, and performing feats on a rope high in the air, dates back to the ancient Greeks (the English words ropedancing and ropedancer date to the early 17th century). The word tumbler has referred to one who performs tumbling feats since the 14th century, and in the 19th century it seems there were both "ground tumblers" and "lofty tumblers." A Matthew Sully, Jr., is described in Olympians of the Sawdust Circle: A Biographical Dictionary of the Nineteenth Century American Circus, by William L. Slout, as a "ground and lofty tumbler." And a writer for an 1837 issue of The New Monthly Magazine and Humorist wrote:

Sometimes, indeed, (to change the metaphor,) an unlucky ground and lofty tumbler, less perfect in his art, will trip in attempting, mal-à-pro-pos, the saut perilleux, and come to the earth with a crash, like the poor rope-dancer at Covent Garden.

Other Early Words for Acrobats

In the mid-18th century the term equilibrist began to be used to refer to ropedancers and others who perform difficult feats of balancing. The early 19th century saw the introduction of the word tightrope into English (we'd previously simply used rope), as well as the words funambulism and funambulist, for tightrope walking and one who does it, respectively. In the mid-19th century aerialist joined the lexicon to refer to one who performs feats in the air or above the ground especially on the trapeze, and a few decades later trapezist ("a performer on the trapeze") settled into the language, to be followed in the 1930s by trapeze artist.

The term acrobacy preceded the synonymous acrobatics, appearing in use at least as early as 1867, which places it about 20 years before current earliest evidence of acrobatics.

Acrobat and acrobatics are the terms that have made the most lasting impression though. Their staying power was perhaps hinted at by how easily they settled into figurative use after adoption:

None of Carlyle's characterizations have excited more ill-feeling than this same one of Lamb. But it was plain from the outset, that Carlyle could not like such a verbal acrobat as Lamb. He doubtless had him or his kind in view when he wrote this passage in "Past and Present": "His poor fraction of sense has to be perked into some epigrammatic shape, that it may prick into me,—perhaps (this is the commonest) to be topsyturvied, left standing on its head, that I may remember it the better! Such grinning inanity is very sad to the soul of man."
— John Burroughs, The Century Illustrated Monthly Magazine, September 1883