The story behind the ladybug's name comes down to Christian symbolism

Ladybugs are the darlings of the insect world, and for good reason: they're cute enough to feature on stationery and kitchen towels. Plus, they eat garden pests, such as aphids. The name is cute too: ladybug. But why are they called that? 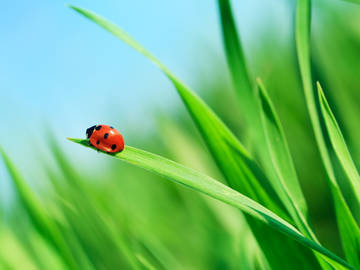 Picture of the ladybug contemplating its name

The bug part of the word ladybug is transparent enough: ladybugs are beetles, which, with weevils, make up the largest order of insects, Coleoptera. The lady part, however, is not so transparent. It has its origin in an allusion to a very particular and much-revered lady: the Virgin Mary, mother of Jesus.

There are approximately 5,000 varieties of the "small and nearly hemispherical and often brightly colored often spotted beetles" (as this dictionary—in part—puts it) that are referred to by the word ladybug. They're all members of the family Coccinellidae, and the color of their wing covers and the number of their spots vary according to species. The Oxford English Dictionary reports that it was the seven-spotted Coccinella septempunctata (native to and common in Europe) that first acquired a name that linked it to the Virgin Mary; its seven spots were thought to symbolize the seven sorrows she suffered. (These include various episodes recounted in the Gospels, from Simeon's early prophecy of the trials Jesus would endure to the witnessing of the crucifixion and burial of Jesus.) The ladybug was an earthly reminder of a key figure in the Christian story, encountered in the green fields and gardens where one might toil daily.

The beetles go by other names too. In American English they're also referred to with the following terms: lady beetle, ladybird, and ladybird beetle. In British English ladybird is the preferred name, but historically lady cow and cow lady were used as well. Most of these date to the 17th century, with lady cow's apparent vintage of the late 16th century making it the oldest by several decades. While the OED points out that cows feature in ladybug names from other languages of the time, as well as in an old Middle English term Godyscow ("God's cow"), which may too have referred to a ladybug, the connection between cows and ladybugs is no longer one easily seen.

Just in case all this talk of ladybugs has you recalling an old children's rhyme, we'll address that here too. "Ladybug, ladybug, fly away home / Your house is on fire, your children are gone" alludes to a somewhat tragic post-harvest event in Merry Olde England. After the fields of hops had been cleared, the hop vines would be burned, and, sadly, many ladybugs with them.

Now the next time you see those ladybug towels, they might seem a little sadder.