The practice of covering a book's jacket with expressions of praise and enticing descriptions of what's inside is an old one. On the jacket of our 1961 unabridged dictionary, Webster's Third New International, you'll find printed "Since 1847 the ultimate word authority for schools, libraries, courts, homes, offices" and "The Great Library of the English Language." The name for such commendation came to be blurb in the early 20th century. 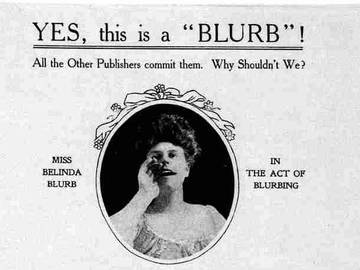 Miss Belinda Blurb in the act of blurbing.

It was coined by American humorist Gelett Burgess, as attested by American scholar Brander Matthews in a September 24, 1922, New York Times article about blurbs: "Now and again in these columns," he writes, "I have had occasion to employ the word 'blurb,' a colorful and illuminating neologism which we owe to the verbal inventiveness of Mr. Gelett Burgess."

The time was 1907, and the place was an annual dinner of the American Booksellers' Association, at which Burgess was one of the honored guests. It was a custom at these dinners for the guest authors to present to the assembled company souvenir copies of their latest books. Being the comedian that he was, Burgess prepared a mock jacket of his latest book Are You A Bromide?, featuring a doctored picture of a woman that he had lifted from a dental advertisement. The woman was dubbed "Miss Belinda Blurb," and she was shown in the picture as calling out a "blurb," indicated by the caption "Miss Belinda Blurb in the act of blurbing." Self-congratulatory text also adorned the jacket. Here are a few excerpts:

Say! Ain't this book a 90 H.P., six-cylinder Seller? If WE do say it as shouldn't. WE consider that this man Burgess has got Henry James locked into the coal-bin telephoning for "information." WE expect to sell 350 copies of this great, grand book.

This Book is the Proud Purple Penultimate!!

Seven years later, Burgess officially defines the word that he had coined in his eponymous Burgess Unabridged: A New Dictionary of Words You Have Always Needed.

Blurb, n. 1. A flamboyant advertisement; an inspired testimonial. 2. Fulsome praise; a sound like a publisher.

Blurb, v. To flatter from interested motives; to compliment oneself.

Burgess adds a note after the definitions which gives clarification: "On the 'jacket' of the 'latest' fiction, we find the blurb; abounding in agile adjectives and adverbs, attesting that this book is the 'sensation of the year.'"

By his seriocomic act at the dinner party, Gelett Burgess helped set a standard in the book industry: apply blurbs to all jackets to sell books. Before long, the effectiveness of blurbs was proven beyond a doubt, and they became commonly used in advertising of any sort.

Burgess is also responsible for popularizing bromide—the name of the chemical compound of bromine used as a sedative—as a word for a "tiresome person." In Are You A Bromide?, he defines a bromide as a person who "does his thinking by syndicate," "follows the main-traveled roads," and "goes with the crowd." In his words, the "Bromide conforms to everything sanctioned by the majority, and may be depended upon to be trite, banal and arbitrary." If you're not this type of person, perhaps you're a Sulphite, the counterpart to the bromide who "does his own thinking," "has surprises up his sleeve," and "is explosive"?

Such social comparisons might have been humorous in Burgess's time, but after reading twenty-something pages on the topic, you're likely to feel sedation coming on. His blurb on the mock jacket, however, is the Proud Purple Penultimate.