But be wary on April 1 anyway.

The origin of April Fools' Day is unknown but there are some theories. One is that religious hold-outs in the 16th century refused to celebrate the re-established New Year's date on January 1st, preferring the end of the holy week in early April, making them "April Fools." Another is that it relates back to the Roman god Ceres being fooled by Pluto when he stole her daughter in what is now early April. Finally, a third theory is that it relates to the vernal equinox the the trickiness of the seasons during this time.

The first of April has long been celebrated as a day of playing practical jokes and tricks on unwitting people and making them feel foolish—hence, the day's name: April Fools' Day. (There's not a singular fool on this day—or any day, for that matter—hence our less common designation on April Fool's Day.) The term April fool can refer to both the people tricked and to the trick itself. 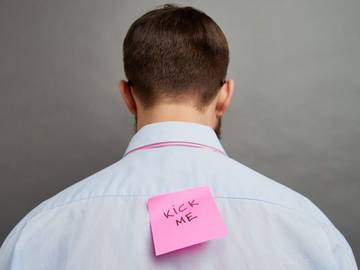 "The first of April is the day we remember what we are the other 364 days of the year."

The top-ranked April Fool of all time, according to the Museum of Hoaxes, was Panorama's 1957 report on how Swiss farmers on the shores of Lake Lugano were enjoying a bumper spaghetti crop thanks to the elimination of the dastardly spaghetti weevil and one of the mildest winter in living memory. Gullible viewers, convinced by a charming video showing peasants harvesting strands of pasta, flooded the Beeb with queries as to how they might grow their own spaghetti tree.
— Lucy Vickery, The Spectator, 1 Apr. 2017

April fool is also used as a verb to denote an act of fooling on the first of April.

Although the tradition of pranking on April 1 goes back centuries, its origin is unknown—but there has been much speculation. One of the many proposed explanations for its origin attributes it to the French, officially with the 1564 Edict of Roussillon by King Charles IX. Upon discovering that various parts of his kingdom celebrated the beginning of the new year at various holy times—such as Christmas or Easter, or the beginning or end of Holy Week—he set out to standardize the first day of a new year and settled on January 1; his promulgation precedes the adoption of the Gregorian calendar (replacing the Julian calendar) by Catholics beginning in 1582.

Because Holy Week and Easter Sunday are based on the lunar cycle—making them annually moveable dates during late March and early April—those who clung to the old ways and kept the tradition (usually in a spirit of mockery) of celebrating the new year in April eventually became known as "April Fools." The first of April is also known as All Fools' Day, which plays on the names of the Christian feasts All Saints' Day and All Souls' Day.

The first day of April, send the gowk anither mile. / April showers bring milk and meal. When April blaws his horn, it is gude for hay and corn. The third day of April, brings the gowk and nightingale.
— Andrew Henderson, Scottish Proverbs, 1832

Another proposed explanation for April Fools' Day relates it to an ancient Roman Festival held in early April to honor the goddess of agriculture, Ceres. Legend has it that her daughter, Proserpina, was carried off by Pluto, the god of the underworld. Ceres supposedly followed her daughter's screams but was fooled by the sound of the echoes, which took her on a fool's errand. Sending someone on such an errand has long been a favorite April Fools' Day trick.

Is it Just Nature?

Yet another explanation relates the custom of trickery on April 1 to the occurrence of the vernal equinox (about March 21), a time of renewal as well as a time when the weather taunts and teases—inevitably, we're all Mother Nature's April fools.

Taking in all these explanations for April 1st foolishness, your mind may have wandered. In the end, all you need to know is when the day arrives, within those 24 hours, even the most staid have been known to indulge in a practical joke or two. In other words, trust no one. And, if you are the butt of an April fool, remember you're not alone, as the great Mark Twain reminds us: "The first of April is the day we remember what we are the other 364 days of the year."