The Synonyms 'Discover' and 'Invent'

In the past, you could invent fruit.

Today, the word invent is chiefly associated with creating or producing something for the first time. But it did not originate in that sense. In its youth, it was used like discover to mean "to come upon" or "to find," and the two words were used synonymously through much of the 16th to 19th centuries. 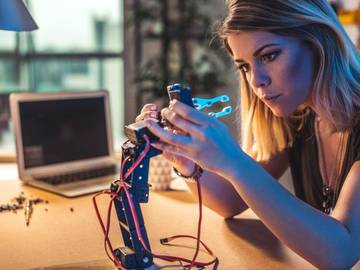 Far off he wonders what them makes so glad; / Or Bacchus merry fruit they did invent….
— Edmund Spenser, The Faerie Queene, 1590

Discover entered English in the 14th century, and it too was used in senses not readily understood by modern ears. Early uses of the word relate to the literal uncovering of something concealed or to revealing something unknown to others, as these quotes from the Bard illustrate.

Will nothing turn your unrelenting hearts? / Then, Joan, discover thine infirmity / That warranteth by law to be thy privilege: / I am with child….
— William Shakespeare, Henry VI, Part 1, 1591

Go draw aside the curtains and discover / The several caskets to this noble Prince.
— William Shakespeare, Merchant of Venice, 1596-97

The Prince discovered to Claudio that he loved my / niece your daughter and meant to acknowledge it this night / in a dance….
— William Shakespeare, Much Ado About Nothing, 1598-99

Another early use of discover was in regard to catching sight of something especially for the first time, such as espying land after being out to sea.

Now when we had discovered Cyprus, we left it on the left hand, and sailed into Syria….
— Acts, 21:3

It is this use of discover, referring to the finding of something by one's own observation (as opposed to finding out through another's), that led to today's familiar sense of the word. By the 16th century, discover came to imply that a person was the first to find or observe something that was previously unknown to others.

This use of discover coincided with the original sense of invent, which ventured into the English language in the 15th century.

The two words were used interchangeably until toward the end of the 18th century, when two other senses of invent began to flourish: its meanings of "to devise by thinking" and "to produce for the first time through use of the imagination or ingenious thinking."

18th-century Scottish rhetorician Hugh Blair was cognizant of this shift in meaning for invent and distinguished it from discover in a lecture:

We invent things that are new; we discover what was before hidden. Galileo invented the telescope; Harvey discovered the circulation of the blood.
— Hugh Blair, Lectures on Rhetoric and Belles Lettres, 1783

Decades later, it appears confusion over how to use the two words was still evident. So much so that American lexicographer Noah Webster echoed Blair in his 1828 dictionary:

Discover differs from invent. We discover what before existed, though to us unknown; we invent what did not before exist.

Nowadays, invent and discover are rarely if ever confused and do not call for usage guidance. For the most part, it's clear by context which word should be used. However, there are cases in which discover is used in place of invent to suggest the accidental or unexpected creation of something new.

A number of drug companies that hope to discover new medicines are synthesizing variants of the THC molecule.
— Solomon H. Snyder, Psychology Today, May 1971

Leave it to scientists to explore alternate uses for a verb.