How 'Wonderful' Lost Its Sense of Wonder

The word once described the most astonishing occurrences. It is now decidedly less supernatural.

Sometimes the changes that we observe in language are big and obvious, and sometimes they are very subtle indeed. The newest meanings of the words mouse or cookie show that language change can be quickly and universally accepted (many people may insist that literally can’t be used for emphasis, as in “I literally died laughing,” but no one claims that a mouse can’t control the cursor on your monitor). 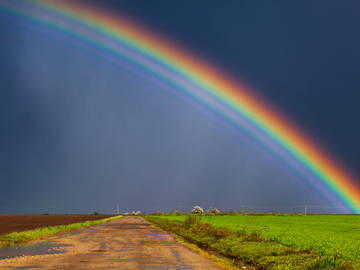 We're off to see the Wizard, the unusually good—or, at least, admirable—Wizard of Oz.

Take miraculous, for example. Initially, the word was only used in reference to miracles, a synonym of supernatural. Over time, through the hyperbole of usage as a modifier for decreasingly supernatural events (a process known as semantic bleaching), miraculous came to be much more commonly used to mean simply “marvelous.” A typical recent example would not require papal verification:

I thought it was just as miraculous and cool to see her making her own yogurt and granola.
—Garbrielle Hamilton, The New York Times, 13 August 2017

Wonderful has taken a similar path. The word’s original meaning seems to be hiding in plain sight: “full of wonder.” Yet it is very seldom used in that way anymore; today wonderful is most frequently used to mean “extremely good” (as in “a wonderful meal”). Indeed, seeing examples of the word used in its original meaning can be jarring—take this passage in a letter from Thomas Jefferson to James Madison written in 1823:

I should then say that, in some of the particulars, Mr. Adams’s memory has led him into unquestionable error. At the age of 88 and 47 years after the transactions of Independance, this is not wonderful.

Noah Webster was working on his great dictionary at the time Jefferson’s letter was written, and indeed he only presented one sense of wonderful in his 1828 dictionary:

He leaves a biblical reference without printing the text (the stingy Yankee presumably wished to save space), but it’s clear that wonderful in this Old Testament passage means “astonishing” and not “extremely good”:

Who is he that hideth counsel without knowledge? therefore have I uttered that I understood not; things too wonderful for me, which I knew not.
—Job 42:3

Indeed, all of the instances of wonderful in the King James version of the Bible are used to mean “astonishing” and not “extremely good.” It’s very clear that, when used this way, wonderful is by no means always a positive thing.

A wonderful and horrible thing is committed in the land.
—Jeremiah 5:30

And yet many passages in the Bible refer to the “wonderful works” of God, which could very easily be interpreted, to a modern reader, as the “extremely good works” rather than the “astonishing works.” In Shakespeare, too, we see wonderful used to mean “astonishing” in distinctively negative contexts. For example, after Hamlet’s mother worries about his show of madness and asks him to come to talk to her, he says “my wit’s diseas’d” and then:

O wonderful son, that can so stonish a mother!

Moving from tragedy to comedy, in Much Ado About Nothing, the respectable Leonato, father of Beatrice, remarks on the sudden change of her attitude toward her sparring partner Benedick:

No, nor I neither; but most wonderful that she

should so dote on Signior Benedick, whom she hath in

all outward behaviors seemed ever to abhor.

In the 17th and 18th centuries, wonderful seems to have long been a go-to word in the golden age of the pamphleteer:

A narrative of a maid lately burnt to death in a strange and wonderful manner by the force of a Chymical Spirit seizing upon her
—Anonymous pamphlet, 1678

A most true and certain Account, how one Charles Bennet, a child but three years old, doth speak Latine, Greek, and Hebrew, though never taught those Languages; and answers all Questions relating to the Bible &c. in a wonderfull manner.
—The Miraculous Child, Manchester, England, 1679

A Faithful Account of many Wonderful and Surprising things, that have befallen several Bewitched and Possessed persons in New England
—Cotton Mather, 1689

Of the wonderful Wild Man that was nursed in the woods of Germany by a Wild Beast, hunted and taken in Toyls; how he behaved himself like a dumb Creature, and is a Christian like one of us, being call’d Peter; and how he was brought to Court all in green, to the great Astonishment of Quality and Gentry.
—It Cannot Rain but it Pours, John Arbuthnot, London, 1726

Not only was wonderful used often in the titles of pamphlets, it was frequently used in the titles of books and treatises published in those years. Jonathan Swift may win the prize with his Wonderful Wonder of Wonders from 1720.

Over time, this frequent use of wonderful led to a dilution in the literal meaning “full of wonder” and an increase in the positive “extremely good” use. This change happened gradually, however: well into the 1800s, Abraham Lincoln was still using it to mean “astonishing”:

It is not wonderful that they were slow, very slow, to acknowledge the truth of such denunciations, and to join the ranks of their denouncers, in a hue and cry against themselves.
—Abraham Lincoln, Address before the Springfield Washington Temperance Society, 22 February 1842

As late as 1899, it was probably clear that readers of The Wonderful Wizard of Oz were meant to feel more awe than admiration for the title character—a point that may be surprising to us today.

As a reminder that seeking logic in the development of language is a foolhardy exercise, the word wondrous, by contrast, has drifted very little from its original meaning over the centuries. Will the wonders never cease?