Dropping Some Truth on 'Windfall'

When fortune lands right at your feet.

A windfall means an unexpected or sudden acquisition or advantage, often in the form of unforeseen financial gain. 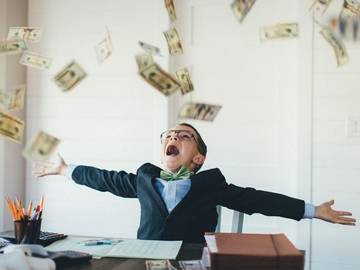 For many people, a financial windfall isn’t necessarily a life-altering moment. Often, it’s quieter than hitting the jackpot or winning the lottery (which, in many cases, can actually make beneficiaries more prone to bankruptcy). It might come in the form of compensation for a workplace injury or a sudden inheritance; sometimes, it might just be a sharp increase in earnings.
— Pavithra Mohan, Fast Company, 10 Apr. 2019

Apple Inc. and Qualcomm Inc.’s surprise settlement agreement Tuesday will result in a huge cash windfall for Qualcomm, and puts Apple on a faster path to 5G for the iPhone.
— Therese Poletti, MarketWatch, 28 Apr. 2019

In 1998, Daimler-Benz, the maker of Mercedes-Benz automobiles, acquired Chrysler in a $36 billion merger. The deal was a windfall for Mr. Kerkorian, raising the value of his Chrysler holdings to nearly $5 billion, more than triple the original investment he made in 1990.
— Jonathan Kandell, The New York Times, 16 June 2015

The original meaning of windfall concerned something (such as a tree or fruit from a branch) knocked down by the wind:

"So I grabs my hat, and wavin' and hollerin' starts down the trail to meet him. A big sugar pine had gone down in a windfall and lay about breast high. I stops jest behind it, old bald-face comin' all the time. …”
— Jack London, “Bald-Face,” in Dutch Courage and Other Stories, 1922

The universal meat staple was pork …, butchered from pigs that had roamed the oak forests since early Christian times fattening themselves on windfall acorns.
— C.P. Reynolds, Gourmet, November 1981

The notion connecting the tree sense of windfall with the sense of an unexpected gain comes from the notion of fallen fruit being there for anyone’s taking. (In truth, some places have laws about taking fallen fruit that hinge on questions such as on whose property the tree is located.)

Therefore, it is not unusual for windfall to appear in contexts that use a verb such as reap or other language pertaining to harvesting.

With the current HECM rules, those living in their homes long enough could reap a windfall when the line of credit exceeds the home’s value.
— Wayne Pfau, Forbes.com, 1 May 2019

Williams also was able to harvest a stock windfall totaling $1.2 million realized through gains from the sale of prior stock awards, the SEC filing showed.
— George Avalos, The Mercury News, 26 Apr. 2019