A word that can mean anything you want it to mean. (Not really.)

We hear wild card used with a number of meanings, both literal and figurative, among them “an unknown or unpredictable factor.”

Everyone’s eyes are in the sky in the clip, as Rhaegal and Drogon soar over the huddled masses, inspiring everything from awe to fear to whatever the hell Cersei is doing. She’s the wild card in all of this, we venture: Will she join the new Queen aid her enemies in eradicating the Night King’s army, or will she simply sip her wine as the world burns, the Mountain’s zombified husk gently washing her feet?
— Randall Colburn, The A.V. Club, 5 Mar. 2019

Informing my mother was tougher because she and I are not close. She's always been a wild card emotionally, overreacting to minor things and ignoring major ones.
— Erin Pastrana, Cosmopolitan, February 2012

The trend is a wild card in the workplace; no one can tell how or when an elder-care crisis will hit. Once it does, relatives find that good home health aides, adult day care or assisted-living facilities are scarce or booked. They often must take over the elder's financial affairs at the same time. About 25% of care givers, studies show, are forced to take a step backward at work.
— Sue Shellenbarger, The Wall Street Journal, 9 Nov. 1994 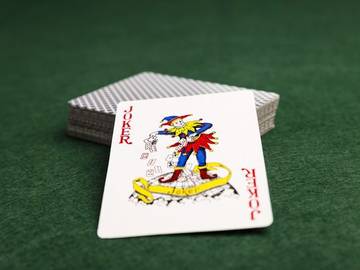 We hope you don't read this and weep.

In card games, a wild card is a card (such as a deuce or joker) that can be used to stand in for any other card as designated by the holder. While there was no apparent pre-existing use of wild that lent its meaning to wild card, the adjective followed suit in such constructions as “the joker is wild.”

Something that is wild (such as an animal) is likely to stray, which might have led to the suggestion of wild as a modifying word for a card that is not pinned to any particular value. Wild card saw its first use in the first half of the 20th century.

Occasionally but not often one found games in which the Joker was the lone wild card, counting as anything, and in such cases it made the play infinitely worse than if all the deuces had been unloosed.
— Emanuel Haldeman-Julius, Haldeman-Julius Monthly, 1928

Today such wild card games as high-low, spit in the ocean, barber's itch, one-card option, baseball and rainbow are increasingly popular, but straight draw and stud are still the foundation and favorites of the game.
— Life, 9 June 1941

A popular use of wild card in contemporary writing applies to a contestant or team who qualifies for a playoff tournament without having already earned entry by a standard method of qualification. All four major sports leagues in the U.S. have playoff systems that allow for wild-card entries. In the NFL, for example, the first-place team in each of the eight divisions qualifies for the playoffs, with wild-card spots offered to the two best remaining teams from each of the two conferences, for a total of twelve participating teams.

Wang, 19, recently found out that a last-ditch effort by USA Gymnastics to get her into the Olympics as a wild card had failed. So there will be no American in the competition for the second time since rhythmic gymnastics became an Olympic sport in 1984.
— Kate Torgovnick, The New York Times, 13 Nov. 2007

Columbus maintained its position as the Eastern Conference’s second wild-card team, tied with the Montreal Canadiens at 81 points.
— Brian Hedger, The Columbus Dispatch, 13 Mar. 2019 As a wild card in her first pro tournament, she beat three established players. Less than a year later she nearly upset Martina Navratilova.
— Franz Lidz, Sports Illustrated, 14 May 1990

In computer programming, wild card is used for a symbol much like a wild playing card, meaning that it can stand for any character or series of characters. In most search programs, that character is an asterisk (*).

Use a wild card symbol ... when you’re not sure of word ending (or beginning). Using environ* will find environs, environmental, environmentally; cat* will find cat, catnip, catastrophe, and so forth.
— Norma and Tony Leone, The Citizen (Auburn, N.Y.), 9 Nov. 2012

Early figurative use of wild card came in constructions that spelled out the metaphor of a card game (as with game verbs such as draw, play, or deal). A wild card was essentially an option (often deployed unexpectedly) that opened up many possibilities for the person exercising it:

England never discarded this "wild" card, and she played it with the greatest of skill. In our century, all the players have quarreled over the Mahomedan card, and it has turned up in every hand.
— Max Glass, Liberation from Yesterday, 1947

At that point, William Franklin played a wild card. He called a meeting of the general assembly at Perth Amboy on June 20 to inform the members that the British Government was sending a peace commission to the colonies.
— Thomas Fleming, New Jersey, 1977

Two years previously he had been virtually unknown in the nation, and in turn he knew next to nothing about the ways of the nation's capital. In fact, he had campaigned against the Washington establishment. The American people — tired, frustrated, and angry with each other and themselves — had purposely drawn a "wild card" from the middle of the deck.
— Richard Walker Bolling and ‎John Bowles, America’s Competitive Edge, 1982

Jurisprudence has always been a wild card in the legal deck. While the dictionary allows it may be the "science or philosophy of law," no two commentators agree on its meaning, still less its relationship with what lawyers think of as real law.
— Calvin Woodard, The New York Times Book Review, 9 Sept. 1990

Secondly, fate dealt a wild card. Upon reaching Frederick and going into camp (on grounds only recently vacated by the Rebels), McClellan was handed an astonishing Special Order 191 of the Confederate Army, which disclosed all of Lee's original plan of action.
— Preston E. Law, Jr., Maryland Magazine, Autumn 1987

As the term saw increased use on its own, without being couched in card game-related phrasings, wild card acquired its current sense of something unknown or unpredictable.