Something Wicked: The Story of an Adverb

You wouldn't understand. It's a New England thing.

Most likely, the first time you encountered the word wicked was in a fairy tale. Wickedness, it seems, is an epidemic in children's literature. Cinderella has her wicked stepmother; the Queen in Snow White is often called the Wicked Queen, and of course, there's the Wicked Witch of the West in The Wizard of Oz, whose origin story forms the basis of the spinoff novel and musical Wicked. 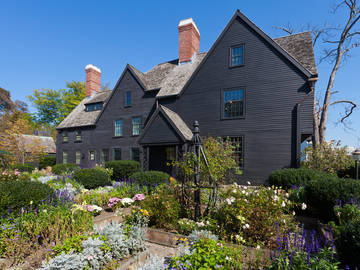 The House of the Seven Gables in Salem, Massachusetts. Though some have linked the Salem witch trials to the use of 'wicked' as an intensifier, the explosion of 'wicked' as an adverb is a late 20th-century phenomenon.

Wicked makes us think of witches and sorcery, and while it appears in pretty much every Shakespeare play, one of the earliest and most famous uses is, appropriately, spoken by a witch:

By the pricking of my thumbs Something wicked this way comes
William Shakespeare, Macbeth, 1606

An alteration of the Middle English wicke, wicked retains the final syllable we hear in other –ed ending words, like blessed and accursed, and that we do not hear in words that look like they should rhyme with wicked, like slicked or picked.

The adjective can have meanings as varied as "morally evil" (as in witches and stepmothers), "fierce or vicious" (a wicked dog), "foul or unpleasant" (a wicked stench), or "likely to cause harm or distress" (a wicked storm).

When used to mean "evil," wicked occasionally comes with a connotation of being clever and conniving:

"What could induce you to enter into such a wicked conspiracy?" asked Mr. Granville, shocked.

"The temptation was strong--I wished to make my son rich. Besides, I hated Philip."

"It is well your wicked plan has been defeated; it might have marred my happiness forever."
Horatio Alger, The Errand Boy; or, How Phil Brent Won Success, 1888

Where there is lots of sunlight, I think the people must be very good. It's only wicked people that love the dark. And the wicked things are always done and planned in the dark, I think. Perhaps, too, that's why I hate things that are mysterious--things that I can't see, that happen in the dark.
Frank Norris, The Octopus: A Story of California, 1901

Another sense of wicked means "of exceptional quality or degree." It often carries the insinuation of being so impressive or incredible as to confound:

The Mud Hens had a roster slot, and the scout had a notion to fill it with the pitcher with the wicked curveball, name of Earl Grayson.
Jerry Spinelli, Maniac Magee, 1990

"Absolute genius. I see it all. The hero calls in Gridley Quayle, and that patronizing ass, by the aid of a series of wicked coincidences, solves the mystery; and there am I, with another month's work done."
P. G. Wodehouse, Something New, 1915

This sense has parallels in words such as mean, which can be stripped of its cruelty in phrases like "makes a mean cocktail."

The adverb wickedly can tie to any of these senses:

Ike turned so he could catch a glimpse of Rolf's face, he was grinning wickedly at Harald. What a jerk, Ike thought. He was even rude with his own friends.
Margo Sorenson, Nothing Is for Free, 1996

When I offer to buy a second serving, they eagerly show me how to shred fresh ginger using a wickedly sharp hand grater.
Shane Mitchell, Saveur, November 2007

If you live in the Northeast, however, wicked might mean something entirely different to you. In that part of the country in particular, wicked is commonly recognized as its own intensifying adverb meaning "to an extreme or impressive degree":

"It's wicked competitive," said Massachusetts Gov. Deval Patrick, who once served on the United Airlines board and has taken to actively recruiting new airlines to Logan.
Scott McCartney, The Wall Street Journal, 27 Feb. 2014

“I always wear kneepads and a helmet, but the other day I took a wicked bad spill and nearly broke my arm.”
Ask Beth, The Boston Globe, 18 Mar. 1997

The folks at the Sportsman's Alliance of Maine (SAM) and the Maine Snowmobile Association have gotten wicked worked up about a wrinkle in the deal by the state to acquire the spectacular lands around Katahdin Lake and attach them to Baxter Park.
Down East, December 2006

While this use isn't exclusive to the Northeast, it has developed such a strong association as to infiltrate depictions of that region—particularly the eastern part of New England—and its culture. The New Partridge Dictionary of American Slang labels adverbial wicked as "[a] rare instance of late C20 American slang that has stayed regional."

So tied to the region is adverbial wicked, in fact, that the use pervades its depictions in popular culture. A character in the Boston-set film Good Will Hunting (1997) says, "My boy's wicked smart." Wicked Local is a network of news publications covering Massachusetts towns. And adverbial wicked gets used facetiously in many a headline pertaining to New England, from Foreign Policy ("John Kerry Is Wicked Psyched He Found Dunkin Donuts in Moscow") to Buzzfeed ("18 Reasons Why Boston Is Wicked Awesome").

Occasionally, adverbial wicked bleeds over the border into New York:

"They were wicked excited. Everyone did a group huddle, and everyone was cheering in the restaurant, and people were looking around, like, what’s going on? It was wicked cool."
Carolyn Nichols, quoted in The Ithacan (Ithaca College, NY), 5 Apr. 2017

Hairwoman tells us they canceled school for a whole week back in the seventies because of the energy crisis. It was wicked cold and would have cost too much to heat the school.
Laurie Halse Anderson, Speak [Set in Syracuse, N.Y.], 1999

So how did wicked, an adjective with a tinge of old-fashioned moralism, find a new identity as an adverbial intensifier in this one part of the country?

One hypothesis suggests that the fact that the city of Salem, Massachusetts, located north of Boston, is famous for its 1692 witch trials and its association with witches, might have something to do with it.

But while there are a handful of examples dating back to the Middle Ages (Yesterday was...a wicked hot day.—Thomas Porter, A Witty Combat, 1663), the explosion of wicked as an adverb is a late 20th-century phenomenon.

As Ben T. Smith of Dialect Blog notes, the use of wicked as an adverb echoes the similar use of other adjectives, such as awful and terrible (e.g., "a terrible cold frost"), as intensifying adverbs that saw use as late as the 19th century.

A possible interpretation is that adverbial wicked was a literal extension of its adjective sense—something that was wicked fast, for example, might have been to such a degree that seemed the result of a curse or supernatural force.

Some have also drawn parallels between wicked and hella, an intensifier (as in "that ride was hella scary") whose origin has been tied to California's Bay Area. While they are used similarly, comparing them would be like comparing wine to clam chowder—or redwoods to maple trees—and would leave people on both coasts hella annoyed. Or wicked annoyed. Whichever you prefer.