Jaywalker seems like a word that must have originated in New York City, since so many pedestrians of that metropolis seem to have no regard for crossing the street at the appointed time or place. Its place of birth is actually far from New York: the word appears to come from Kansas, or at least that is where we first see evidence of it in written use. Many of the other things we might think about jaywalker are similarly other than we might suppose. 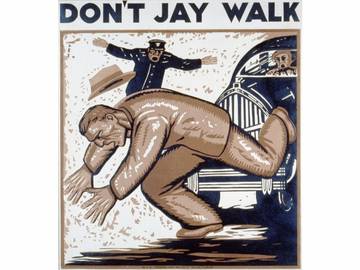 It is unclear why 'jaywalker' survived, while 'jay-driver' languishes in obscurity

The meaning of jaywalker is different than it was when it first began to be used. The word was formed in imitation of a slightly older word, the jay-driver. This initially referred to a driver of horse-drawn carriages or automobiles who refused to abide by the traffic laws in a fairly specific way: they drove on the wrong side of the road.

An article in The Junction City Union (Junction City, Kansas) on June 28th, 1905 begins “Nearly every day someone calls our attention to articles that have been appearing in The Kansas City Star concerning ‘The Jay Driver’”, and then goes on to warn against these miscreants who cannot seem to figure out that they should be driving on the right side of the road.

Stop at the corner of any well traveled street in the business part of the city and see how many know how to drive—that is to keep to the right hand side of the street—and you will be astonished at the number who don’t know that this is the right way to do or who are careless in regard to the matter.

In October of that same year in The Kansas City Star, we find mention of the pedestrian version of these drivers:

Much annoyance would be obviated if people when meeting others going in the opposite direction would keep to the right and avoid collisions and being called a ‘jay walker.’

For the first few years that it was in use jaywalker had little, if anything, to do with pedestrians crossing the street, and was used solely to scold those who lacked sidewalk etiquette.

Both jaywalker and jay-driver are taken from a sense of the word jay, meaning ‘a greenhorn, or rube’. It is unclear why jaywalker shifted its meaning and survived for more than a hundred years now, while jay-driver languishes in obscurity. And if you are one of those who find the conduct of the jaywalker objectionable beyond words, take heart, for the sentiments of early 20th century America are in line with yours; in the words of The Chanute Daily Tribune in 1909: “The jay walker needs attention as well as the jay driver, and is about as big a nuisance.”