Poring Over Stories of the 'Growler'

Growling may be involved in its name, but who or what is doing it?

In 19th-century America, a person of any age (when drinking laws weren't strongly enforced yet) could pick up a growler of beer at the local bar, tavern, or public house and bring it home or to another place for consumption—even a child could do so for a parent, or for another adult for some compensation. At that time, a growler was usually a covered pail or can or a pitcher, and the amounts poured into it varied. Today, the standard for a growler is 2 quarts, or 64 ounces, and the typical growler is a glass jug, which is often filled (and refilled) at microbreweries. A growler of beer can also be purchased pre-filled at stores selling alcohol. (Beer aficionados will tell you that a howler holds 1 quart, and it gets its name from being half the size of the growler.) 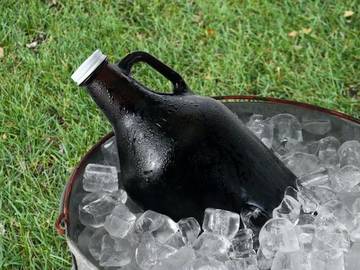 The origins of the name are a delicious mystery.

The act of sending someone out to purchase beer in a growler came to be known as "rush the growler (or can)"—the verb rush, implying a sense of speediness.

They tell me that Henry Dixey has read the riot act to his chorus girls for rushing the growler between the acts.
— Al Thayer, Pickings from Lobby Chatter in the Cincinnati Enquirer, 1894

Both expressions originated during the 19th-century American Temperance Movement, which sought to abolish the sale and distribution of alcohol and which eventually led to Prohibition.

A frequently touted origin story of how the "beer" growler got its name is that supposedly the sound of a full covered pail of carbonated beer sloshing about rumbled and "growled" as the carbon dioxide escaped and rattled the cover. The story is plausible, but there is no etymological evidence substantiating it.

Other similar theories based on a "growling" sound suggest it comes from the grumblings of a cranky, impatient person waiting for the beer or of the youth who has to go out against his or her will to fetch it. There is also the idea that after consuming an entire growler, a person might get moody and "growl."

The bartender has also been the subject of speculation. Did the beer pourer short the customer by quickly filling the growler in a way that created more foam than necessary, in the end leaving the container less than full and the customer less than satisfied?

What these stories all suggest is that it is likely this sense of growler, referring to a container of beer poured from a tap at a bar or brewery and taken home, is of imitative origin, but who used it first and in what context remains a mystery—one best contemplated over a few pints of your local finest.