Why Don't We Call It 'Woodchuck Day'?

The history of 'Groundhog Day'

Every year, on the second day of February, a beloved American tradition is widely observed. For some this is the practice of watching the 1993 Harold Ramis film Groundhog Day, in which Bill Murray portrays a meteorologist who must endure a seemingly endless repetition of the titular holiday. Others choose to observe the holiday itself, (“February 2 observed traditionally as a day that indicates six more weeks of winter if sunny or an early spring if cloudy”) rather than the movie. 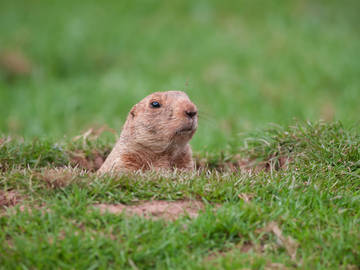 'Woodchuck Day', a variant of 'Groundhog Day', was celebrated in the 1860s. The name never caught on.

Although this ritual, which typically centers on the observation of the behavior of the Marmota monax when it observes (or neglects to observe) its own shadow, has been traced back to the first half of the 19th century, our earliest known use of Groundhog Day comes in the early 1850s.

The 2d of February is known to our natives of the mountain by the not very euphonious name of ground-hog day. It is believed, by them, to be a certain index of the weather for the first six weeks.
—Lebanon Courier and Semi-Weekly Report (Lebanon, PA), 13 Feb. 1852

While it is unclear what name was given to February 2nd prior to this point the holiday appears to have been well-established by the time it began being referred to as Groundhog Day, as many of the early citations of this use indicate that El Día de la Marmota was widely known.

To-day, of all other days, from time immemorial, is rendered “famousest of all,” from its peculiar name, “groundhog’s day.” It is said that upon the second day of February, the ground-hogs come from their burrows, and, seeing no shadows of themselves, remain out—a sure sign of a commencement of pleasant weather.
—Daily Scioto Gazette (Chillicothe, OH), 2 Feb. 1854

There must be something in “ground-hog day” after all. This, as everybody knows, occurs on the 2d of February.
—Porter’s Spirit of the Times (New York City, NY), 19 Mar. 1859

Ground Hog Day.—February 2d was the celebrated “ground hog day,” which according to legal, fixes the question of an early or late Spring. The story goes that on that day the ground—or, as the Yankees call it, woodchuck—leaves his winter quarter and sallies forth to sniff the air.
—Wilkes’ Spirit of the Times (New York City, NY), 31 May 1862

The fair-minded readers among you will doubtless have felt stirring of outrage on the part of the woodchuck; why should the groundhog receive all the fame and glory, when woodchuck is a perfectly acceptable variant? Why doesn’t anyone celebrate Woodchuck Day? Well, people used to, but it never quite caught on the same way.

So if you on occasion feel as though your life has become a version of the cinematic Groundhog Day, and would like to avoid the dreariness of reliving the same February 2nd over and over again, you may begin by attempting to bring back this little-used name for the day on which we excitedly gather round to watch a rodential meteorologist.