Yes, our money has Bohemian origins

Many people are fascinated by etymology, and will happily spend a large amount of time tracing some specific word’s history, looking back through hundreds of years of history in search of lexical information. While we are always happy to see people indulge their passion for language, we must also say that in many cases the story of a word’s history is likely to be a rather dry affair. If you are at a dinner party, and someone tries to engage you in small talk by telling you the interesting story of a word such as posh there is a good chance that the word’s history will not actually be as supposed. 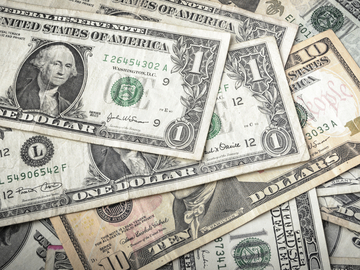 The 'dollar' is known throughout the world, but the word's origin story begins hundreds of years ago in a small town in Bohemia.

However, there are thousands and thousands of English words with great backstories. Take, for instance, the humble dollar: why do we call our basic unit of currency by this name?

It all begins, logically enough (if you accept a somewhat loose definition of “logically”), in a small mountain town in northwestern Bohemia, named Jáchymov. In the beginning of the 16th century this town (located in what today is the Czech Republic) was known by its German name, Sankt Joachimsthal, which may be translated as “dale (or valley) of Joachim.” This may not seem yet like it allows a logical path to the modern dollar, but it will.

About the beginning of the 16th century the Count of Schlick (a name that comes from genuine history books, and not from a Lemony Snicket novel) opened a mine in this town, and from its ore began to mint and issue a good amount of silver coin. William Lyman Fawcett, in his Gold and Debt; an American Handbook of Finance (1879) informs us that these coins were “of uniform weight and fineness” and that “traders of the time were in want of some international standard,” and so “these coins soon became in good repute all over Europe under the names of Schlicken thalers or Joachim’s thalers.”

The second of these names, more often written as joachimstaler, appeared to have had more success than did schlicken thaler, although it did not last for a terribly long time. Soon the name of this coin became shortened to the German taler, and from there became daler. By the middle of the 16th century the English language had added daler to its vocabulary, used in reference to an increasing variety of coins from Europe and elsewhere which were being so described.

The dollar was proposed as the monetary unit of the United States in the early 1780s, and adopted formally in 1792 (although they were not actually issued as currency until 1794). Since that time our language has taken on a remarkable number of synonyms for this word for “100 cents,” often found in the form of slang. We have paid for things with bones, bucks, smackers (and smackeroos), clams, iron men (for silver dollars), plunks, and simoleons.

Although the list of slang and colloquial terms for the dollar (and other denominations of our currency, such as Benjamin for the $100 bill, which bears the portrait of Benjamin Franklin) is long and quite creative, we are sad to report that the word based on the long-dead Count appears to have been largely overlooked. If you are of a mind to try to introduce a new bit of slang for the dollar, and would like to spice your coinage with a degree of historical flair you could certainly do worse than schlickenthaler.