Why Did We Stop Using 'Thou'?

Beating people is not a good way to enact grammatical change

The word thou has a pleasingly anachronistic ring to it, calling to mind a simpler and perhaps more formal time, when people considered their words (so we might imagine) and respected their elders. Occasionally we receive letters asking why it is that the English-speaking people left this word by the roadside. Why did people stop using thou? Well, in some cases it could be because they were beaten when they said it. 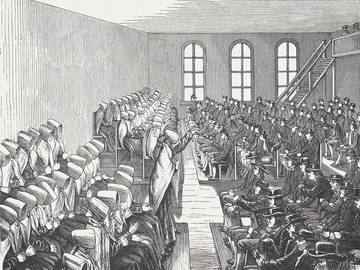 In his 1660 book, George Fox claimed that Quakers, who persisted in using 'thou', were "often beaten and abused, and sometimes in danger of our lives, for using those words to some proud men, who would say, 'What! You ill-bred clown, do you Thou me?'"

Before getting to how fisticuffs functioned as an agent of syntactical change let’s back up a bit, and have a quick refresher on how this word functioned in the English language of yore.

In modern English we expect the word you to take a numerically ambiguous role, since it is used regardless of whether the speaker is addressing a single person or many. This was not always the case. Formerly we used thou as the second person singular pronoun (which simply means that we would use thou to address another single person). Thee was used in the objective or oblique case (when referring to the object of a verb or preposition), and thou was used in the nominative (when indicating the subject of a verb).

As Old English began to grow up a little, finally getting a job and moving out of its parents’ house, the singular use of thou began to change. The pronoun that had previously been restricted to addressing more than one person (ye or you) started to see service as a singular pronoun. Initially you was used to refer to a person of high social standing (such as royalty, who would be addressed as “your majesty”) but soon came to be used as well when speaking with a social equal.

As a result, poor thou was downgraded, and was used primarily when referring to a person of lower social standing, such as a servant. However, this pronoun did not disappear, as it also functioned as an indicator of familiarity or intimacy, and retained its function as a singular form of address for God in many cases in ecclesiastical writings. We still see thou is some forms of modern use, such as in discussions of the “I and Thou” concept of Martin Buber’s philosophy, or in colloquial phrases such as “holier-than-thou.” For the most part, at least in normal linguistic use, thou has been largely supplanted in modern times by you, although it does exist still in certain dialects in Northern England and Scotland, as well as in the community of the Religious Society of Friends (commonly referred to as Quakers). This is where the violence comes into our story.

When this portion of our language began to shift there was a belief among many Quakers that the use of the singular you was inappropriate, on the grounds that it violated grammatical tenets, and enforced unwanted social distinctions. One of the founders of the Quakers, George Fox, felt strongly enough about this matter that he wrote an entire book on the subject (which was a bit longer than one might imagine it would be, taking up over 200 pages), published in 1660. The sentiments of this work were made quite clear in the title, which was “A Battle-Door for Teachers & Professors to Learn Singular & Plural; You to Many, and Thou to One: Singular One, Thou; Plural Many, You.”

In Fox’s journal he explained how the general public reacted to his grammatical advice (not very well):

For Thou and Thee was a sore cut to proud flesh, and them that sought self-honour, who, though they would say it to God and Christ, would not endure to have it said to themselves. So that we were often beaten and abused, and sometimes in danger of our lives, for using those words to some proud men, who would say, “What! You ill-bred clown, do you Thou me?”
—George Fox, A Journal, or Historical Account...., 1836

If truth be told, the fact that the Quakers were “often beaten and abused” did not seem to have very much effect on how they used thou, and since this form of the pronoun may still be found in communities of Friends today we must accept two things: the reason we stopped using thou as a singular pronoun probably did not have much to do with violence, and was due to normal forces of syntactical shift, and beating people is not a very good way to enact grammatical change.