Diversity in the entertainment industry has been a hot topic for a while—Variety published essays in 1956 about the paucity of black actors on television and the big screen—but lately the discussion has moved to the forefront. The confluence of an all-white Oscar slate with the casting of the white actor Joseph Fiennes to play black musician Michael Jackson has led to renewed charges of Hollywood whitewashing. 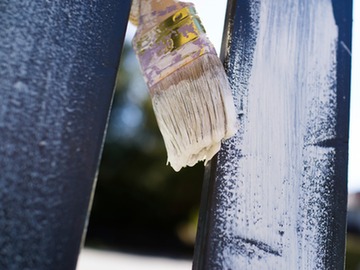 More and more people are using 'whitewashing' to describe the practice of casting white actors as non-white characters.

This new sense of whitewashing refers to casting white actors as characters who are non-white or of indeterminate race, as in the casting of Fiennes as Jackson. It can also refer to preferring white actors, directors, cinematographers, and so on, over equally qualified people of color, as in the Oscar nominations. This isn’t a new issue in Hollywood, as our earliest citation for this sense of whitewash notes:

Finally, the movie makers must not be afraid to lie - especially if it makes us look good. Hollywood has been whitewashing (pun intended) history since movies were invented. (Wiley A. Hall, Afro-American Red Star, 6 Dec. 1997)

This use of whitewashing began to take off in the late 1990s, as more people of color called out the television industry and Hollywood for their tendency to default to casting white actors. We have mounting written evidence of both the noun whitewashing and the verb whitewash.

It is, as Hall notes, a sly pun on the earlier use of the verb whitewash which can refer to making something whiter, usually by applying a whitener of some sort to it (as in, “We have to whitewash the fence annually”). Whitewash can also refer to glossing over or covering up something that is immoral, illegal, or otherwise bad (as in “a book which whitewashes the country’s troubled past”), and the connotations of this particular whitewash have certainly bled over into the Hollywood whitewash.