Whistleblower began as a word literally referring to someone who blows a whistle. Later it became associated with referees overseeing sporting events. Soon after, the phrase blow the whistle gained metaphorical meaning as "calling attention to something, such as criminal activity, kept secret." It was only natural then that whistleblower came to reference the person who "blew the whistle" on criminal activity. 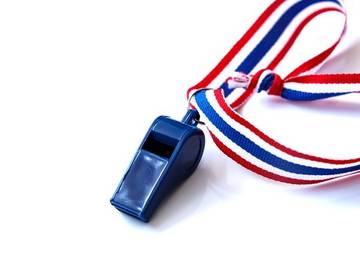 The English language has a good number of words which may be loosely defined as “tattletale.” This should come as no surprise, given that we appear to always have a good number of people doing something that calls for some tattling. What is surprising is that almost all the words for the person who’s doing the tattling are somewhat uncomplimentary. If you see someone doing wrong and decide to tell someone about this you may find yourself referred to as a snitch, squealer, rat fink, stoolie, or any one of a number of other unappetizing words.

The Original Use of 'Whistleblower'

One of the exceptions to the semantic realm of ‘snitches get stitches’ is the word whistleblower, defined as “one who reveals something covert or who informs against another.” When whistleblower first came into use, in the 19th century, it was not the type of word that we would define, as it was a self-explanatory compound. In other words, a whistleblower (originally hyphenated as whistle-blower) was simply “one who blows a whistle,” and thus no more in need of defining than, say face-slapper would be, provided it meant “one who slaps a face.”

They see by every breeze and from this quarter that Harmanson is plunging and foaming at a rate that must prove his utter destruction before November, and they, the pipe-layers and whistle-blowers of the city are sonnding (sic) the alarm in earnest.
— Southern Sentinel (Plaquemine, LA), 22 Aug. 1849

A kettle-drum, a fifer and a whistle-blower, formed the orchestra for bruin to dance by—truly, fit music for a bear.
— San Francisco Bulletin, 1 Dec. 1860

Around the end of the 19th century whistleblower took on a more specific meaning. It no longer referred only to one who blew any kind of whistle; now the word was applied to the referee in a sporting contest, who blew the whistle in an administration of rules and judgment.

…it was decided (if possible) to obtain the services of an outside referee, but failing this Mr. M. Newsome, of Dewsbury, the president of the Yorkshire County Committee, will officiate as “whistle blower.”
— The Huddersfield Chronicle and West Yorkshire Advertiser (Huddersfield, Eng.), 5 Apr. 1890

Up to Wednesday in last week I had, as a law-abiding footballer, a profound veneration for the Referee’s Association, and looked upon the Secretary as the personification of all the good qualities of what a ‘whistle blower’ should be, so I made an effort to see the said gentleman officiate.
— Jackson’s Oxford Journal (Oxford, Eng.), 24 Feb. 1894

Blowing the Whistle on Wrongdoing

Shortly after whistleblower began to be used for the referee in sporting contests we see whistle used in more metaphorical fashion, in the phrase blow the whistle, which we define as “ to call public or official attention to something (such as a wrongdoing) kept secret.”

I am loath to believe that Mr. Johston ever blew the whistle on a trusting friend, but Tex believed it, and he carried Johnston on the book for years.
— San Francisco Chronicle, 10 Feb. 1929

He was not trying to keep from “burning” in the electric chair, but thinking of saving his mother and father humiliation, he testified, in explaining how he “blew the whistle” on his former friends.
— Richmond Times Dispatch, 29 Aug. 1934

Once blow the whistle opened the door to such figurative use it was only a hop, skip, and a criminal indictment before we got to the modern-day sense of whistleblower.

The statement later says that despite the fact that Playboy was among the earliest whistle-blowers and despite Gov. Rockefeller’s reassurances that no economic reprisals would be suffered by those who cooperated in the investigation “we were dismayed to learn that the press in New York reports a plan by the State Liquor Authority to question our license status.”
— Variety, 24 Apr. 1963

Until now Mr. Patman has been far more successful as a whistle blower than legislator. None of his labors has resulted in legislation on foundations. However, his persistence has focused attention on what increasingly is regarded as an area of serious abuses, if not a major danger to the economy.
— Stanley Levey, The Pittsburgh Press, 1 Feb. 1967

We rarely use whistleblower these days as a term for referee; the words has been almost entirely supplanted by the “informer” sense, in which it provides the useful function of serving as a relatively non-pejorative synonym for tattletale. It also has taken on a specific legal sense, "an employee who brings wrongdoing by an employer or other employees to the attention of a government or law enforcement agency and who is commonly vested by statute with rights and remedies for retaliation." While whistleblower may not be the word most people would like to put on their résumés, it at least can carry a sense of "upright and concerned citizen," a sense of nobility that is sorely lacking in rat fink.