'Whiskey' and 'Whisky' and Alchemy

Anyone who has overindulged in whiskey and felt like dying the next day will see the irony in the origin of the word whiskey: it traces back to the Medieval Latin phrase aqua vitae, meaning "water of life." 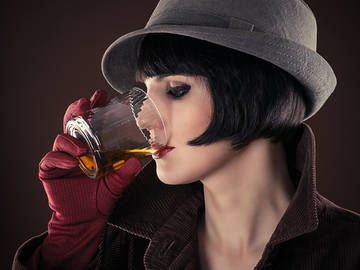 'Whiskey' can be traced back to the Medieval Latin phrase 'aqua vitae', meaning "water of life."

The 15th century alchemists who first used the term aqua vitae were doing so to refer to distilled spirits. They were searching for immortality (in addition to wealth and longevity) and must have settled on the name a dram or two shy of overindulgence. (To be fair, it's likely that it was less euphoric drunkenness that made them choose the name than the substance's medicinal properties.) Their Latin borrowing has endured in English: aqua vitae is still a generic (and seldom used) term for a strong alcoholic liquor, like brandy.

Whiskey (as it's typically spelled in the United States; more on whiskey/whisky below) is the modern version of the Hiberno-Scots take on aqua vitae. It's a shortening of earlier whiskeybae and usquebaugh, among many other variants, all of which are borrowed from either Irish uisce beathadh or Scottish Gaelic uisge beatha and refer to a drink traditionally distilled from malted barley.

Aqua vitae inspired coinages in other languages as well: aquavit (also styled as akvavit), a Swedish, Danish, and Norwegian take on aqua vitae, refers to a clear Scandinavian liquor flavored with caraway seeds; eau-de-vie, which refers to a clear brandy distilled from the fermented juice of pears, raspberries, or other fruit, is a French translation of the term.

Now about that spelling: is your local hipster bar using "whisk(e)y" as a category heading on its menu because it looks cool, or is there a distinction that requires parenthetical diplomacy to be accurately inclusive? Well, whiskey is the usual spelling in the U.S. and Ireland, while whisky is the usual spelling everywhere else. The labels on bottles will typically reflect the spelling favored in the land from which they hail—though some American bourbons align themselves more with scotch and use whisky.