There's lots of shade in this one

As must sometimes be the case, this investigation of the word umbrella begins with the tale of the object to which it refers. 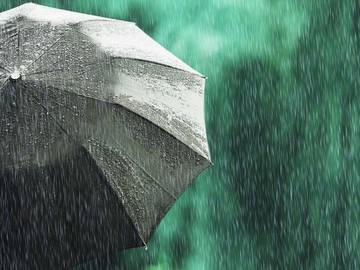 'Umbrella' was borrowed from the Italian word 'ombrella,' a modification of the Latin 'umbella,' which came from 'umbra,' meaning "shade, shadow."

History tells us (via Encyclopedia Britannica) that umbrellas existed in many ancient societies, including those of Egypt, Mesopotamia, China, and India, where they served to protect important people from the sun, thereby serving also as a sign of prestige and power.

Europeans got introduced to the sun-shade umbrella idea by the ancient Greeks, and then learned from the Romans that umbrellas were also good for protecting one from the rain. (Hotly disputed in parts of the United States but nonetheless true, umbrellas can also protect one from the snow, as anyone familiar with Japanese woodcuts knows.)

Just how unenlightened the Dark Ages were is unclear—both "Middle Ages" and "Dark Ages" are 17th century designations made by influential people bent on putting distance between their own time and that other one—but what is clear is that during that so-designated millennium, umbrellas disappeared from Europe entirely.

The curious among us might wonder how the concept of umbrellas fared during that long era. Did people miss them? How often did a cloak thrown hastily over the head shield a brain buzzing with the object's absence? No one knows. We know only that umbrellas reemerged in Europe in Italy partway through the 16th century, but with a caveat: they were only to be used by popes and clergy.

And in the middle of all that, in the early 17th century, the word umbrella began making inroads into English. It was borrowed from the Italian word ombrella, a modification of the Latin word umbella, itself a diminutive of umbra, meaning "shade, shadow."

(The Oxford English Dictionary reports that the word fannell, also spelled phanelle, had a brief tenure as a term for an umbrella, but the word is represented in that work by only a single instance in a 16th century translation of a German quasi-travelogue. Fannell was, it seems, an umbrella fail.)

Latin umbra has had other English lexical implications over the years, though none with reference to so pedestrian an object as the umbrella. Both adumbrate and umbrage see some use in current English, with the former mostly used as a synonym of foreshadow, as in "playground bickering that adumbrated a scuffle," and the latter referring to a feeling of offense, as in "one who takes umbrage at even the gentlest criticism."

Other umbra words are, we submit, better employed for cheap guffaws:

In an umbrous glen on a hot summer day, an umbratile picnic commenced. All was well in the umbriferous cool until the most umbrageous picnicker took umbrage at something said, and retreated to a yet more umbratic spot to sulk. Sadly, they were lost, apparently inumbrated in a penumbra of their own displeasure.

More seriously, English speakers didn't consider the promises of a verb use for umbrella until the mid-19th century.