And how high up is the snuff, anyway? 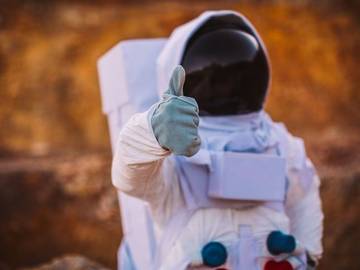 "This space mission is a-okay in my book!"

We don't know who first thought to tack snuff on to up to, but it appears to have been some clever 19th century Brit. The earliest evidence we've recovered of the phrase is in an 1807 London newspaper in text now only partially readable: "… asked a young lady if she would have a pinch of snuff, and on … in the negative, he facetiously observed … suppose you are up to snuff." But the phrase seems to have its literary (though we're using that term somewhat loosely) debut in a work by one John Poole.

The year was 1810, approximately two centuries after Shakespeare had shuffled off this mortal coil.

Poole was inspired, apparently, by the Bard. We don't know how he felt about the phrase "shuffled off this mortal coil," but we do know that he had some interest in Hamlet, the play in which that phrase originates, because Poole took it upon himself to write a little burlesque of the famous tragedy. Poole's 1810 Hamlet Travestie : in Three Acts earned him a reputation as a funny guy (and eventually a spot in London's National Portrait Gallery).

What's unclear is what exactly "up to snuff" is doing in Poole's play. Whatever it is, it's not serious. Not much in the play is. Note its opening lines, spoken by Hamlet's uncle-cum-stepfather:

Tho' by our dismal phizzes plain 'tis seen

The mem'ry of our brother's death is green;

Yet, as he's laid in peace upon the shelf,

'Tis time we think upon our royal self:

We, therefore, to dispel our royal spleen,

Have ta'en his widow Gertrude for our Queen.—

Further evidence of the play's absurdity is that the final duel is replaced with a boxing match punctuated with these dying words from the Queen:

'Tis now too late—I've had a precious swig—

If I'm not a dead woman—dash my wig.

But on to "up to snuff": the phrase is spoken in Hamlet Travestie by Hamlet's friend Guildenstern, who, along with pal Rosencrantz, has been called from afar to suss out the batty-seeming Hamlet's state of mind. The King asks if they've got a sense of why Hamlet is so depressed. According to Rosencrantz, Hamlet admits he's not feeling quite sane but won't let on as to why. Guildenstern adds:

He won't be sounded; he knows well enough

The game we're after: Zooks, he's up to snuff.

Poole doesn't expect his readers to know the phrase. In what reads as a surprisingly post-modern romp, the text of his play is followed by "annotations" written by Poole but attributed to various 18th century Shakespeare commentators, among them George Steevens, Samuel Johnson (also of lexicographical fame), William Warburton, and Alexander Pope. The commentators sometimes give conflicting information in their annotations, as do Warburton and Johnson in this particular case.

"Warburton" writes of "he's up to snuff":

This is highly figurative. To snuff up is to scent. Guildenstern says,

that is, he has got scent of the game we are in pursuit of. The metaphor, which is striking and apposite, is borrowed from the Chase.

But "Johnson" chides and instead avers,

Without having recourse to a far-fetched explanation, I choose to understand the passage in it's [sic] common acceptation: The game we're after means nothing more than the trick by which we are endeavoring to worm from him his secret; but which, as he is up to snuff, i.e. as he is a knowing one, he will, assuredly, render inefficacious.

So is "up to snuff" here, as Poole's Warburton asserts, a play on the verb snuff in its animal-specific meaning of "to sniff at in order to examine"? Is "game we're after" a hunting reference? Or does "up to snuff" in fact, as Poole's Johnson says, describe someone who perceives or understands something, that is, who is "in the know"?

In the end it seems "Warburton" is the fool "Johnson" suggests. In the 1823 revision of the 18th century Grose's Classical Dictionary of the Vulgar Tongue, the phrase (noted as emphasized in phrases like "up to snuff and two-penny" and "up to snuff, and a pinch above it") is glossed as being synonymous with "up to slum," which in turn is glossed as "to be flash." Flash itself is defined as "knowing" and "understanding another's meaning." (And let's pause here for a moment to appreciate lost slang, now that we're all suddenly more flash ourselves.)

Poole's Johnson wins, and indeed hews close to the likely meaning in the 1807 newspaper snippet as well. Dictionaries that followed Grose concurred.

In this company's 1864 Webster's Unabridged Dictionary, "up to snuff" is labeled "colloquial" and defined as "not likely to be imposed upon; knowing; acute; alert." In the next edition of that dictionary, published in 1909, the phrase is labeled "slang" and glossed as "not easily deceived : worldly-wise." In the 1934 Unabridged, that definition is retained (as is the entry's "slang" label) and two new senses added: "in full fettle; up to scratch," and, with an "Eng." label, "by no means unsophisticated." The 1961 Unabridged labels two senses as "chiefly British"—"not easily deceived" and "sophisticated, worldly-wise"—and includes also " in good shape or normal condition : up to an accepted standard"; the "slang" label is absent. In the Merriam-Webster.com dictionary that accompanies the article you now read, "up to snuff" is defined as "of sufficient quality : meeting an applicable standard."

There's little debate about the snuff in "up to snuff." It's the pulverized tobacco snuff that is chewed, inhaled into the nose, or placed against the gums. People in Poole's part of the world had been introduced to snuff in the 16th century, when the New-World practice of inhaling a preparation of tobacco started to become popular in Europe. The English word comes from the Dutch, who referred to such powdered tobacco as snuf, short for snuftabak, itself from snuffen, meaning "to draw forcibly through or into the nostrils; to snuff," and tabak, meaning "tobacco." Snuff became very popular, a habit of the fashionable and sophisticated, and people clearly thought themselves clever for its use.

Incidentally, the phrase "up to scratch," which means "of a satisfactory condition, level, or performance," is several decades newer than "up to snuff," and has its origin in pugilism: at the beginning of the match and each round, boxers were required to stand with their toes against the scratch, a line drawn across the prize ring. A boxer who could not do so was unable to come up to scratch, and therefore not up to snuff.