Sit all the way through the movie credits and you're likely to see a few terms you don't encounter in many other places, including gaffer. 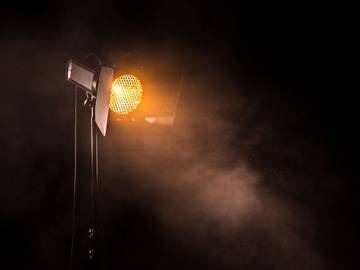 And before you ask, a 'best boy' is the gaffer's chief assistant.

But the word gaffer is far older than the movie industry. In fact, the word predates Edison's patent for the first incandescent lightbulb by three centuries. In its earliest use in the 16th century, the word was used as a title of respect for an older gentleman, but later came to simply refer to an old man. The word is believed to be a phonetic reduction of the word godfather, which, it should be noted, referred to a man who sponsors a person at baptism long before it made its own cinematic debut.

Gaffer has a contrasting term in gammer, which also began as a title of respect before coming to mean "an old woman." Gammer has, however, not developed additional uses, and its use to refer to an old woman is now seldom heard.

Sometimes the tools of a trade prove useful outside that trade. So it is with gaffer's tape. Gaffer's tape (also called "gaffer tape" or "gaff tape") looks a bit like duct tape, but can be removed without leaving the sticky residue familiar to the irresolute duct tape user. We assume the Corleones would have appreciated its discretion.