For more than 600 years things with the words weigh and weight were neat and clean. The first was the verb, and the second was the related noun: you weigh something to get its weight.* This is still largely true.

But then in the mid-17th century weight started to wade into verb territory, carrying with it a specific meaning: "to oppress with a burden." 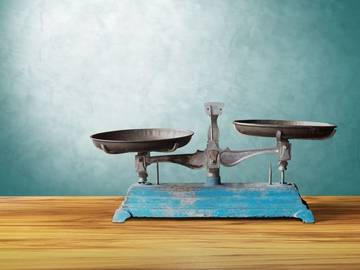 Not that it was much of a burden to lexicographers. (We see this type of behavior all the time.)

This meaning of the verb weight is still one of its dominant meanings, found in such phrases as "weighted down with worry." A less doleful meaning later developed: "to load or make heavy with or as if with a weight," as in "a breezy room where papers must be weighted down to keep them from blowing away" or "a weighted blanket that's supposed to help you relax."

From the "oppress" and "make heavier" meanings, the verb weight went on to develop other uses popular in the more technical contexts of the language, not all of them pleasant. A substance that is increased in heaviness with the aid of an inferior ingredient, for example, is said to be weighted. But a camera lens made thicker is also weighted. In statistics, items in a frequency distribution are weighted when the relative frequency or importance of the items is made part of their value. In weighted grades, particular kinds of assignments are given more importance than others. And in an extension of those meanings, something that is arranged, biased, or inclined in a particular direction by manipulation is also said to be weighted, as in "a system weighted in favor of grammar enthusiasts." And in a semantic behavior that can only be characterized as annoyingly typical in English, weight has historically also been used as a synonym of weigh. We're happy to report that the use is rare—at least in published, edited text.

For the most part, we can keep weigh and weight straight by using weigh as a verb and weight as a noun, with a smattering of exceptions for statistics and grades and blankets. Our advice: take comfort where you can.

* Except it's of course not true that everything was neat and clean: as the Oxford English Dictionary reports, weigh had from the start additional meanings, now obsolete, that had to with bearing and carrying and holding up; these meanings eventually led to the nautical meanings having to do with heaving up a ship's anchor that are found in this dictionary. The main meanings of weigh and weight did, however, from the early days serve as complementary forms.