The word hoverboard has recently seen a dramatic surge in use, as a result of it being widely used to describe a kind of scooter, one which has two wheels attached to a small platform and is operated in a hands-free fashion. That it does not hover seems not to bother people as much as the fact that the devices are, at least in this early state of development, rather prone to catching on fire. 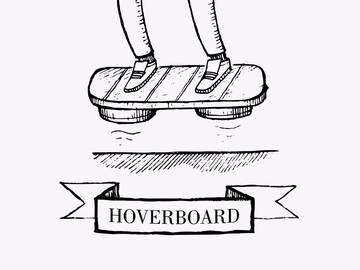 The "hoverboard" first shows up in print in 1967, nearly 20 years before Back to the Future II (or 40 years, depending on your reckoning).

The actual hovering hoverboard, a skateboard that appears to float magically just above the ground, has been a fixture in our popular imagination since it made a dramatic appearance in the 1989 Back to the Future Part II. This film, the sequel to the 1985 Back to the Future, takes place in what was then the distantly-imagined future of 2015. The hoverboard shows up in a scene where the protagonist, Marty McFly, rides one as a means of escaping a gang of bullies, mirroring a scene in the original film in which a similar escape was made via an earthbound skateboard.

Although the word hoverboard did not enjoy widespread use until after this cinematic exposure, it did exist before this time. In 1986 it appeared in an issue of Texas Monthly magazine, in Stephan Harrington’s imagining of what Texas might look like in the year 2036:

There were kids on hoverboards, a few daredevils from the Houston Pedestrian Club, infants in robot prams, and a crowd demonstrating beneath a banner that read ‘Multi-Gender Pride Week.’

And in a doctoral thesis published that same year, Inez Weekley Curry wrote of high school students who were engaged in various forms of creative work:

Still another had a hover-board. Three propellers, a Weed-Eater motor and a skateboard, they believed, should work.

But the earliest currently known use of the word, by a long shot, comes from a 1967 book by M. K. Joseph, The Hole in the Zero. This novel, subtitled A Story of the Future, falls into the genre of what might be called speculative science-fiction, and contains the line:

He chattered on about girls and riverside dancehalls and hoverboard skating, and seemed to look with pleasure on Paradine, who was smugly daydreaming about the report which would be lying on Number One’s desk after lunch.

It seems we have been thinking about floating skateboards for a number of decades, and although some airborne prototypes now exist it does not appear that we will all be blowing about on such things any time soon. We should not be so surprised that the wheeled variety now so seemingly ubiquitous should have been granted its slightly imprecise name; when you come down to it, hoverboard is probably a catchier name than rollerboard and certainly preferable to fireboard.