New Year’s resolutions have existed since the early 19th century, and perhaps as far back as the late 17th century. Not only were people making resolutions 200 years ago, but they were also breaking them and using them as excuses for bad behavior before the New Year, much like today.

It’s unclear when exactly we began to pledge to ourselves that in the coming year we would lose weight, get our finances in order, or leave behind any one of a number of unsavory habits. 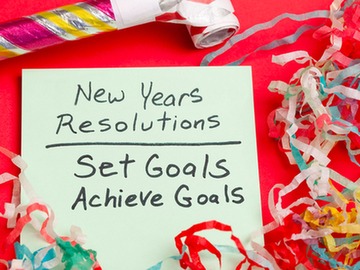 It would appear that New Year's resolutions have existed for quite a long time. A 1671 entry from the diaries of Anne Halkett, a writer and member of the Scottish gentry, contains a number of pledges, typically taken from biblical verses such as “I will not offend any more”. Halkett titled this page “Resolutions”, and wrote them on January 2nd, which would possibly indicate that the practice was in use at the time, even if people did not refer to it as a New Year’s resolution.

It was common enough by the beginning of the 19th century that people would make (and fail to keep) such resolutions that the habit was satirized. An article from Walker’s Hibernian Magazine in 1802 states that “the following personages have begun the year with a strong of resolutions, which they all solemnly pledged to keep”, before enumerating a series of obviously fictitious resolutions (“Statesmen have resolved to have no other object in view than the good of their country…the physicians have determined to follow nature in her operations, and to prescribe no more than is necessary, and to be very moderate in their fees.”)

Made to Be Broken

Shortly after this the words new year began to appear before resolution. The full phrase is found in the January 1st issue of a Boston newspaper from 1813, in a short article titled “The Friday Lecture”:

And yet, I believe there are multitudes of people, accustomed to receive injunctions of new year resolutions, who will sin all the month of December, with a serious determination of beginning the new year with new resolutions and new behaviour, and with the full belief that they shall thus expiate and wipe away all their former faults.

The writing of this unknown author informs us of two things: we have had New Year’s resolutions for over 200 years, and people in the early 19th century—much like those today—used them as an excuse for misbehavior up to New Year's Eve.

It’s better to find out in December that a five-mile run is a bit optimistic for your current fitness level, so you can dial it back and start with two-mile runs in January. And to make sticking to your New Year’s resolution even easier, with a few weeks of occasional warm-up jogs, you won’t be starting from scratch on Jan. 1. You’ll already have gotten over the worst of the starting period. You might even be beginning to see results.
— Harry Guinness, The New York Times, 2 Dec. 2019