What's the difference between a 'boat' and a 'ship'?

All dictionaries try to avoid the dread lexicographic condition known as circular defining. This is when one looks up a word such as dictionary, sees that it is defined as “a lexicon,” and, when looking up lexicon, finds that it is defined as “a dictionary.” Given that we spend a considerable amount of time avoiding this sort of defining, it may come to a surprise to some users to discover that one of the definitions for boat is “ship,” and vice versa. 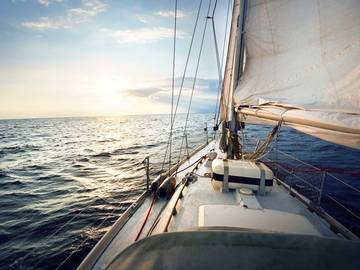 Take to the sea.

This is not actually a case of circular defining, as these seeming examples of synonymy are but one of a number of possible meanings for each word. And we do not define the words in this manner out of a desire to annoy people who love to observe the distinction between these two kinds of vessels. The reason we offer the definitions of “ship” for boat and “boat” for ship is that this is the manner in which a large number of people use the words.

‘What is the difference between a ship and a boat?’ has a good number of answers, but unfortunately most of these are not couched in the type of precise language a dictionary aims for. Sample responses to this question include ‘You can put a boat onto a ship, but you can’t put a ship onto a boat,’ ‘a boat is what you get into when the ship sinks,’ and ‘a boat is the thing you put gravy in.’

If you were to look for precision by asking this question of ten nautically-inclined people in ten different areas it is possible that you would get a wide range of answers, for the exact moment at which a boat becomes a ship varies considerably. We define ship in the following ways: “a large seagoing vessel,” “a sailing vessel having a bowsprit and usually three masts each composed of a lower mast, a topmast, and a topgallant mast,” and “boat (especially one propelled by power or sail)”. Boat has a slightly narrower semantic range, including “a small vessel for travel on water,” and “ship.”

Usage writers appear to have been warning people about these words since the late 19th century; boat appears on James Gordon Bennett’s “Don’t List” in the New York Herald, with instruction to avoid “except in describing a small craft propelled by oars.” However, the distinction between boat and ship had been observed by others well before this.

Mr. Barnes then proceeded to state the distinction between a boat and a ship, and contended that all vessels above a certain tonnage, and which were registered, came under the denomination of “ships,” inasmuch as boats had no register.
— The Essex County Standard (Colchester, Eng.), 29 Oct. 1841

”What do you think, William, is the next gradation?”
”Why, father, is there any thing between a boat and a ship?”
”We are not come to a ship yet, William; we have only spoken of such sorts of vessels as are moved by paddles or oars.”
— Isaac Taylor, The Ship, or Sketches of the Vessels of Various Countries, 1834

Despite the fact that we’ve been receiving admonitions about boat and ship for over a century now, many people cheerfully insist on using boat for waterborne vessels of any size. However, few, if any, use ship to refer to small crafts. If you find that you are unable to remember the which is the larger between ship and boat it may help to sing the children’s song Row Your Boat (“row, row, row your ship” sounds decidedly odd — small oared crafts are almost always referred to as boats). No matter how many aphorisms we come up with, it seems unlikely that we are going to get much more specific than 'ships are bigger than boats.'

Considering that our language has hundreds of words for different kinds of things that float on the water it is somewhat odd that we should focus exclusively on the difference between only these two. Should you find yourself beset by an angry sailor who calls you out for using boat when you should have used ship you may turn and ask if they know the difference between a xebec and an umiak, a corvette and a wherry, or an argosy and a garvey (the first ones are all ships and the second ones all boats).

The fact that English usage is messy, and has contributed to a use of boat that is somewhat vague, does not mean that there aren't settings where precision is called for. For instance, when you are sailing on someone else's vessel it is polite to always employ the correct terminology. And if you find yourself at a loss about when a boat becomes a ship you should contact your local maritime authority.