Is it world-building or worldbuilding? There's evidence of both spellings in print, but world-building is much more common in published, edited text. However one spells it, the word—which has seen an enormous surge in popularity in recent years as a noun meaning "the art of creating a new fictional world," or as a verb describing the act of world-building—is older than it looks. 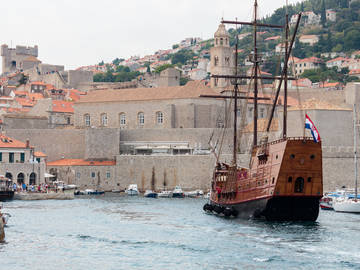 In the 19th century, 'world-building' described the imaginative realm of artists and poets. Today, it is most often used to describe the creation of an entirely new fictional world.

Today, world-building is most often used to describe a component of a work of fiction, much like plot or character; unlike the word setting, world-building emphasizes that the world being created is entirely new. For this reason, it's typically associated with fantasy and science fiction:

You can spend hours and hours thinking about the history and culture and mores of your imaginary land, and how people interact and the ways that different religious and ethnic groups collide. But if you don't make me feel the dirt under my fingernails, then you still haven't created a real place. If the reader doesn't get a little lightheaded from the stench of the polluted river, or transported by the beauty of the geometric flower gardens, then something is missing. Most of all, there should be a few spots — bars, taverns, crypts, spaceports — where the reader really feels "at home," as if you could imagine hanging out there for real. The purpose of worldbuilding isn't just to do a cool exercise, but to give a sense of place — and all of your thought experiments absolutely have to result in something vivid and alive.
—Charlie Jane Anders, "7 Deadly Sins of Worldbuilding," Io9, 2 August 2013

It also leads to the challenge of worldbuilding Black American mythopoesis. Most of the fantastic is built upon non-US myth & folklore. Why?

So much of the hard part of worldbuilding isn't the building at all, but the pruning of the universe.

It would be an interesting new word, if not for the fact that world-building is not a particularly new addition to the English language. Although it has taken on a new sense in the past few decades, the word has been employed for over 200 years. Our earliest evidence of it comes from 1805, when it appears to have been primarily used in describing the attempts of scientists to explain geologic formations.

Mr. Bigland, author of Letters on the Study of History, and other works, is engaged in an interesting work, on a new plan, for the use of schools and young persons of both sexes, under the title of Letters on Natural History, and the Formation of the Universe. Another touch at world building!!
—The Literary Magazine; or, Monthly Epitome of British Literature, Aug. 1805

The second chapter, on the formation of the island, commences with some judicious reflections, on the use of theories, respecting the formation of the earth, in which the author advances all that can be said in favour of what we have often denominated WORLD BUILDING.
—The Literary Magazine; or, Monthly Epitome of British Literature, Oct. 1805

For the immediate creation and arrangement of all things by an omnipotent power, at a certain determinate epoch, seems to put an end to almost the whole of the human art of world-building.
—The Imperial Magazine, May 1820

This sense of world-building was too technical to merit inclusion in our dictionary.

By the late 19th century, world-building had escaped from the confines of scientific jargon and was being used to describe the imaginative realm of novelists and poets.

To this world-building all the great poetic minds are driven; within this invisible empire alone can they reconcile the life that surrounds them with the life that floats like a dream before them.
—Hamilton Wright Mabie, Under the Trees and Elsewhere, 1891

We all of us, even if we are not artists, have to a certain degree this world-building power; but unless it is present in eminent force in the work of dramatists and novelists we miss from that work the deep, rich flow of character through plastic forms and apparently capricious facts.
—Elizabeth Luther Cary, The Novels of Henry James, 1905

This sense was not common enough to merit inclusion in our dictionary.

By the second half of the 20th century, the term began to see a more specialized use, referring not simply to an author’s imagination of the world, but also denoting the creation of an entirely new world.

There are several levels on which Dune operates, e.g., as swashbuckling adventure, as an examination of the messiah figure in human society and religion, as a carefully documented study in worldbuilding (transforming the desert planet of Arrakis into a greenbelt), as a consciously literate and literary attempt at quality prose styling.
—Lahna Faga Diskin, Teaching and Reading Science Fiction in College (PhD diss.), 1975

This is the world-building that has seen an enormous increase in usage in the past decade, driven by the popularity of writers like Ursula K. Le Guin and George R.R. Martin. The term has moved beyond literature to encompass a variety of media, including film, television, and games; it is increasingly popular; and its precise meaning is still in somewhat of a state of flux. So is its spelling. If we were to enter it today, the entry would read "world-building, also worldbuilding."