The prolific and widely acclaimed American writer E. L. Doctorow died July 21, 2015 of complications from lung cancer at the age of 84.

Doctorow's real fame began with the 1975 publication of his novel Ragtime, a story of New York–from wealthy New Rochelle to the knockabout street life of the Lower East Side–in the years before World War I. A central character, Coalhouse Walker, is a Harlem pianist whose favorite music is the rhythmically infectious style that had been dominating popular music since the turn of the century: ragtime. 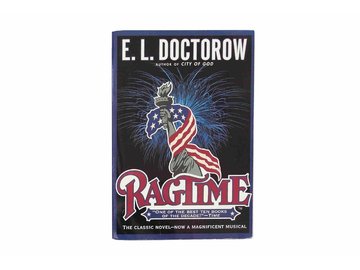 Ragtime (the term apparently derives from "ragged time," or syncopation) evolved in the late 19th century in the playing of honky-tonk pianists along the Mississippi and Missouri Rivers. Rags (as ragtime pieces were called) were known for their bouncingly syncopated melodies played against a regular "striding" left-hand beat, as in the hugely successful "Maple Leaf Rag" (1899) by Scott Joplin, the "King of Ragtime."

With the near-simultaneous arrival of the player piano, the public began hearing rags on piano rolls in bars and entertainment venues everywhere. The piano rag style was quickly taken up by bands and in popular song, and rags were soon accompanying such popular dances as the cakewalk, the one-step, and the polka. By the end of the war in 1918, the style was merging into the larger phenomenon that was becoming known as jazz. A few short years later ragtime would become the music of the past. It was this time of transition that Doctorow famously captured in his novel.