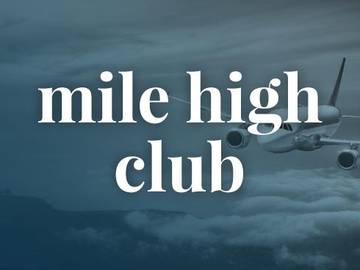 What does mile high club mean?

Mile high club is a euphemism that refers to a highly unofficial group, composed of those who have had sex in an airplane in transit

Where did mile high club come from?

People have been using this expression, which may be described as jocular, offensive, or jocularly offensive, for over 50 years now. Please note that this is not a real club.

How is mile high club used?

Psssst! Don’t ever ask any airline stewardesses if she’s a member of the “Mile-High Club” unless you want a rap in your trap. The girls will understand that item.
— Walter Winchell, The St. Albans Messenger (St. Albans, VT), 1 Jul. 1968

Famed British-H’wood film star joined the “Mile High” club—persons who’ve made love in planes. The Atlantic-borne stewardess who detailed the scene to us said, “We conferred on what to do and discovered there was nothing in our book of procedures to cover it — so I just threw a blanket over them.”
— Jack O’Brien, Jersey Journal (Jersey City, NJ), 22 Jun. 1974

And sex on planes is hardly new; jokes about joining the "mile-high club" -- a euphemism for in-flight sex -- are probably as old as the airline industry itself.
— Asra Q. Nomani, The Globe and Mail (Toronto, Can.), 17 Jun. 1998

A couple took the "mile high club" to shameless new heights - by getting it on in right in their seats. The horndogs were on a Ryanair flight from Manchester to Ibiza when they took off their pants and started getting frisky, according to passengers.
— Natalie O’Neill, The New York Post, 10 Jun. 2017