A common complaint about the Internet (and many other earlier technological advancements) is that it is somehow destroying people’s ability to effectively use the English language. Even worse, the fact that people may now communicate with each other and perform many of their quotidian tasks without ever leaving their homes has given rise to fears that entire generations will exist without knowing the sublime pleasures of cutting the line at the supermarket, or of failing to hold the door for the next person entering a building. 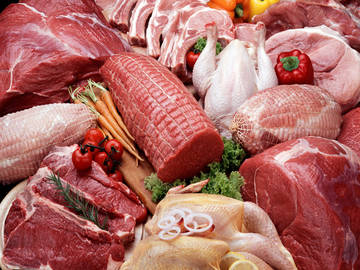 In Old English, the word 'meat' simply meant “food.” The world outside your computer may or may not be a terrible place. But at least it has meat.

After all, if everyone decides to shop for groceries, engage in thrilling romances, and keep abreast of all the latest shenanigans of the glitterati without leaving the comfort of their own home, will there still be a real world left to inhabit? Of course there will, and the diehard netizens of the world even have a brand new (relatively speaking) word to describe that world: meatspace.

This compound noun began being used in the early to mid-1990s, and is thought to be patterned after the earlier cyberspace (“the online world of computer networks and especially the Internet”), which dates to the early 1980s.

I'm on my way out the door to San Rafael. You can meet me in meatspace at the Marin Alano Club if you need to. DO NOT PANIC.
—rec.music.gdead (Usenet newsgroup), 9 Aug. 1995

By 1995 meatspace had already escaped from its relatively incorporeal form in online use, and was being employed, at least occasionally, in newspapers.

Zimmermann and his defenders - he is under investigation by U.S. federal authorities - say that PGP is needed to counter the threat of state surveillance, which can be done much more easily and systematically in cyberspace than in meat-space (as some cypherpunks call the space in which you are now sitting).
—Robert Everett-Green, The Globe and Mail (Toronto, Ont.), 23 May 1995

On Dec. 13 the issue caused as many as 20,000 netheads leave cyberspace and take action in "meat space" by calling members of Congress to express their displeasure, according to the Center for Democracy and Technology in Washington.
—Elizabeth Weise, Associated Press, 18 Dec. 1995

Meatspace has grown increasingly common with each passing year, and has demonstrated a frequency of use that is sufficient for us to consider it for inclusion in our dictionary. The word may now be routinely found in mainstream newspapers and magazines, often without the author feeling any need to explain its meaning to readers.

Opsec lives in a hall of mirrors. He understands that webspace and meatspace, though connected, remain largely distinct.
—William Langewiesche, Vanity Fair, Oct. 2016

The question is whether this substitution is habit-forming and soul-shaping, and whether it extends beyond dangerous teen behavior to include things essential to long-term human flourishing -- marriage, work, family, all that old-fashioned "meatspace" stuff.
—Ross Douthat, The New York Times, 20 Aug. 2016

If you find that meatspace still grates upon your nerves, what with its imagery of squishiness and blood, perhaps it will make you feel better if you think about the initial component of the word in its earlier meaning. In Old English (and in some contexts considerably later) the word meat simply meant “food.” One of the cardinal rules of lexicography is that laying bets on whether a word will be successful or not is a bad idea, but we will go out on a limb and wager that foodspace is unlikely to attain sufficient currency to displace meatspace anytime soon. But if it makes you feel better you can still use it.