Stock up on groceries and vocabulary.

If you love the English language (and are one of those starry-eyed dreamers who think that the English language loves you back) and believe that maybe one day you will create a special word which will become part of the English language, well, we’ve got some bad news for you. English doesn’t really work that way. Even if we need a word for something, there is very little chance that the word you invent will catch on. Except that sometimes our language does in fact take on new words in this manner, just often enough to give people hope that they shouldn’t have. Bombogenesis may be one such word. 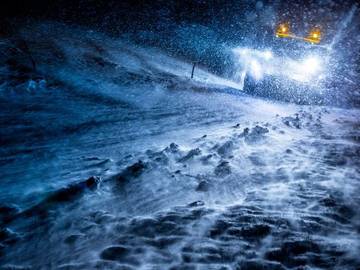 Or "bomb cyclone," if you prefer.

We (and seemingly everyone else who lives in an area prone to snow) are watching this word, and assessing whether it will enjoy sufficient breadth of use and specificity of meaning to warrant defining. The specificity of use part seems fairly assured; well-nigh everyone who employs bombogenesis uses the word is talking about the same thing: the rapid intensification of a low-pressure system in which the barometric pressure of the system drops at least 24 millibars in 24 hours (also referred to as explosive cyclogenesis). Whether bombogenesis gains widespread use remains to be seen. However, the word has been in use for almost three decades, and appears to be increasing in frequency.

The earliest written record for bombogenesis that we currently have is from a thesis submitted for a Master of Science degree at North Carolina State University in 1989.

Adams appears to have combined bomb and cyclogenesis, a word meaning “the development or intensification of a cyclone” (and which has been in scientific use since the early 1930s). The origins of bomb as a meteorologic term are not entirely clear; although reputed to have been in spoken use for a number of decades prior to this, our earliest written record of this sense of bomb occurs in 1980.

By defining a “bomb” as an extratropical surface cyclone whose central pressure fall averages at least 1 mb h−1 for 24 h, we have studied this explosive cyclogenesis in the Northern Hemisphere during the period September 1976–May 1979.
— Frederick Sanders and John R. Gyakum, “Synoptic-dynamic climatology of the ‘Bomb,’” American Meteorological Society, Oct. 1980

Cyclogenesis is itself a compound word, formed by combining cyclone and genesis. Bomb is a word with a much less straightforward origin, and anyone who wishes to spend some time in an activity which will make them feel much more educated should go read the note under this word’s etymology.

We cannot say for certain whether Michael E. Adams invented the word bombogenesis, for true origins of any word, even one so recent as this, are often far more elusive and slippery than they seem. But we can say the following: bombogenesis is a word which has a good chance of being added to our dictionary soon, Michael E. Adams is the first known person to have used this word, and the English language loves him.