But it does address a disputed use, which means we're doing our job

In scientific usage, a light-year is a unit of length that is equal to the distance light travels in one year in the vacuum of space: about 5,878,000,000,000 miles. But nonscientists apply the term far more freely, using light-year for any extremely large measure of comparison—be it distance, time, or, say, branding skills:

Those who view KISS more favorably … would just as readily argue that they brought concert merchandising to a new frontier and were light years ahead of the curve in their emphasis on branding. (They even sell KISS-branded caskets and urns.)
— Garrett Gravley, The Dallas Observer, 21 Feb. 2019 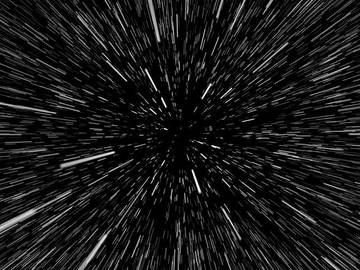 Here we see light years (sometimes that hyphen isn't employed) emphasizing the great prescience with which the cosmetically-ebullient band KISS jumped on the branding bandwagon. The astronomically educated sometimes object to such uses: a light-year is a unit of length used to describe distance, they point out, not speed or foreknowledge. The phrase ahead of the curve, defined in this dictionary as "faster about doing something than other people, companies, etc.," is, however, often modified by distance words, as in "miles ahead of the curve," so perhaps "light-years ahead of the curve" is standard hyperbolic use. But there are plenty of other examples in which light-year strays completely from its distance application:

School photo day: After what feels like light years since we were in high school, those three little words strung together are still enough to fill even the most photogenic among us with dread.
— Marissa G. Muller, Glamour, 7 Sept. 2016

Here, light-year is clearly taking on the role of a unit of time—which is not the role light-year was intended to have. Words are of course not beholden to the intentions of those who coin them, and light-year has moved on from its strict "unit of length" meaning. And who can blame the speakers of the language for letting it stray? A year is a unit of time, after all, and we have a number of year terms that are all about time: fiscal year, calendar year, school year. Even the astronomical year terms are about time: lunar year, sidereal year, cosmic year.

It's helpful to note at this point, though, that none of these has a hyphen. The hyphen that is traditionally used in light-year tells you that light and year are linked in a particular fandango that has a shorthand form in per: a light-year is the distance that light travels per—that is, each—year. Someone feeling cantankerous about the matter might put the blame for the semantic saunter squarely on the scientists themselves: they did not include in the term any explicit reference to length or distance, such as miles or kilometers. Can the layperson be blamed for thinking that light-year is about time? On the other hand, can the scientists be blamed for avoiding the whole issue of the metric system (aka International System of Units) vs. the, er, other system used only by three countries in the whole world including the one that is home to this here dictionary?

Perhaps not. But your dictionary is not in the business of absolving people of blame. We merely want to make the issue clear. Light-year is technically, but not transparently, a unit of length used to describe distance. In non-technical use it is applied to any extremely large measure of comparison. Do with that what you will.