A Deep Dive on 'Deep Dive'

No lifeguard on duty. Research at your own risk.

Prognosticating which newly-arrived English words will survive is, like gambling on the ponies and betting on which of your friend's marriages will first end in divorce, a fool's endeavor. However, given that there is always a certain lag time between when a word begins being used and when it manages to end up getting defined in a dictionary, we like to write about words which are being watched, but are not yet included. One such example is deep dive (write your own cheap pun and place it here). 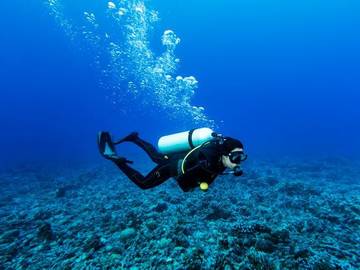 Let's get to the bottom of it.

Deep dive has recently taken on the meaning of "a thorough examination of a subject or topic." It currently is often found when describing a piece of journalism of a certain gravity or comprehensiveness.

The Atlantic called it a “farcical battle,” while Slate published a deep dive into the politics of the labeling fight (both outlets, it should be noted, used “lab-grown” in their headlines).
— Liz Crampton, Politico (politico.com), 16 Jul. 2018

Considering how long we've had the parts making up deep dive, it's a little surprising that it's taken us this long to put them together in this manner. Dive used as a verb has been with us for well over a thousand years now, although the sense meaning "to plunge into some matter or activity" did not come into general use until the 16th century.

...and the most faire are commonlye most fond, vse not too many familiars, for few prooue frendes, and as easie it is to weigh the wind, as to diue into the thoughtes of worldlye glosers.
— Robert Greene, Greenes Groats-worth of Witte, 1592

When you can diue deepe into your owne fansies, you thinke them as familiar to all others, as to your selfe.
— Thomas Bilson, The Survey of Christs Suffering, 1604

The noun sense of dive, initially meaning "the act or an instance of diving," comes about somewhat later, appearing in print in the middle of the 17th century.

He dived therefore somewhat lower yet;
And truely such a dive was fitt,
To sound the intralls of so deepe a pitt.
— A. B. C. D. E., Novembris Monstrum, 1641

While we do see evidence of deep modifying dive as far back as the 18th century, it is used in a somewhat different context than its modern application.

Lord, what a whirl! at one deep dive,
In this blest region to arrive.
— Samuel Jackson Pratt, Miscellanies, 1785

Deep dive may be found a number of decades back, particularly used in writing about deep-sea divers, employed in literal fashion to refer to the act of descending a considerable distance under water. However, the "thorough examination" sense appears to be fairly recent, dating to the late 20th century. Much of the early use of this sense appears to be found in business writing, perhaps the only register of English which can compete with the jargon of youth for most-complained-about-language-use.

"We take a deep dive into the supplier's process capability to understand what defect levels we are getting and what the process will yield. We look at process defects, part defects, software defects, and prevalence defects," says Maxie.
— Purchasing (Boston, MA), 14 Jan. 1999

Fulfilleds tend to be information-intensive. They are conservative and don't like much risk, considering themselves financially responsible and viewing risk-taking as irresponsible. "They take a deep dive into research before they do anything," Breman says.
— Edward Staples, Advisor Today, Nov. 2000

Deep dive now appears to be undergoing a form of functional shift; in recent years writers have begun to use it as a verb. Although it may look quite similar to dove deep there is a subtle semantic difference between this and deep-dived.

In order to keep up with the trend, wireless semiconductor IC manufacturers have deep-dived into the production of low-power ICs.
— Business Wire, 10 Jun. 2013

I deep-dived into this idea of respect with Leslie Voth, chief executive of the family office Pitcairn.
— Norb Vonnegut, The Wall Street Journal (online), 13 Feb. 2014

The company deep dived into its global AI strategy, and highlighted how it is working with the ecosystem in India to improve solution performances on Intel's AI platforms.
— Ed Nair, Dataquest, 31 May 2017

Both the noun and the verb forms of deep dive are now among the words we are watching (along with thousands of others). It is exceptionally difficult to guess with any accuracy a new word's chances of remaining in use, so we urge you not to bet on any one word against another. If you want to engage in a wager in which you have a chance of winning, we recommend betting on the races or your college roommate's marital woes.