Why is it Socrates' deathbed but Dickens's novels?

Names are proper nouns, which become plurals the same way that other nouns do: add the letter -s for most names (“the Johnsons,” “the Websters”) or add -es if the name ends in s or z (“the Joneses,” “the Martinezes”). To show possession using an apostrophe, add ’s for individuals (“Smith’s car”) and just the apostrophe after the s for plurals (“the Smiths’ car”). If a family name ends with an s or z, you can choose to use just the apostrophe (“the Williams’ dog”) or ’s (“the Williams’s dog”). By convention, names from classical mythology and the Bible ending in s show possession with the apostrophe only (“Jesus’ teachings”).

the Smith clan → the Smiths

Jill and Sam Clarence → the Clarences

Mr. and Mrs. Jones → the Joneses 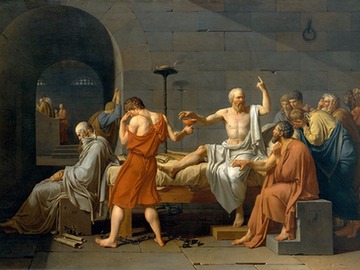 the Daley family → the Daleys

If you want to talk about something that belongs to more than one member of a family, you start with the plural form and add an apostrophe to show possession:

a party at the Fernandezes' house

If you want to talk about something that belongs to a single person being identified by last name, you follow the usual -'s rule for most names:

the car that belongs to Smith → Smith's car

For names that end in an s or z sound, though, you can either add -'s or just an apostrophe. Going with -'s is the more common choice:

the car that belongs to Jones → Jones's car or Jones' car

For classical and biblical names there are other rules. For names ending in s or es and having two or more syllables, you usually just add an apostrophe. If the name is only one syllable, add -'s.

The names Jesus and Moses are always made possessive with the apostrophe alone:

The usual way to show possession with a name that ends in a silent s, z, or x is with -'s.