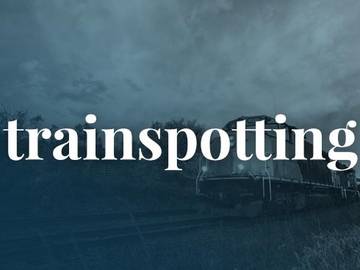 What does trainspotting mean?

Trainspotting is the practice of watching trains, particularly as a hobby, with the aim of noting distinctive characteristics.

Where did trainspotting come from?

Trainspotting came to the attention of most Americans through the 1996 film of that name (directed by Danny Boyle, and based on the book by Irvine Welsh). The practice and name of trainspotting had been well established in the United Kingdom for decades prior to this, dating back to the years shortly after the Second World War. One who engages in trainspotting is a trainspotter.

How is trainspotting used?

Train-spotting is evidently a serious business, and following my reference to the club in North Hull, I am told by 14-year-old R. K. Evans, of Hessle, that a flourishing club has been in existence locally since last December.
— Hull Daily Mail (Hull,Eng.), 7 Dec. 1948

To railway officials the 1.28p.m. train from Basford and Bulwell to Nottingham Victoria is known as "Round the Houses" train, because it does the trip via Daybrook, Gedling, Netherfield and Colwick. But to the 40 or 50 kiddies who regularly crowd into it on Saturdays its the "Train Spotters' Special."
— Nottingham Evening Post (Nottingham, Eng.), 11 Aug. 1947