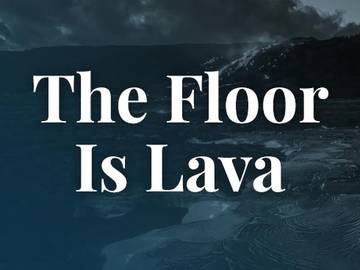 What does The Floor/Ground Is Lava mean?

The Floor/Ground Is Lava is a game (and meme) in which players must avoid touching the floor or ground when one player calls out "the floor/ground is lava, quicksand, etc."

Where did The Floor/Ground Is Lava come from?

A popular version of the game in which the floor or ground becomes an imaginary danger to be avoided is The Floor Is Lava. That game erupted as the hottest (pun intended?) social media meme of the summer of 2017. Viral pictures and videos feature people (in malls, at parks, in the streets, etc.) going to extremes to hoist themselves off the ground after someone unexpectedly calls out "The floor is lava!" Participants will frantically scale walls and store shelves, jump on trash cans, counters, fire hydrants, and the backs of people, or shinny up the nearest pole — all to avoid getting burned by the molten rock.

The meme is based on a popular kids' game also known as "Hot Lava." As demonstrated in the memes, the basic rule of the game is: you can touch anything but the floor or ground. Though the floor is usually called "lava" in the memes, it can be anything deadly in the kids' version that you don't want to fall into—such as quicksand, acid, a black hole, or a shark-infested ocean.

During the course of the game, players must jump from one piece of furniture to another (and maybe "islands" made from couch cushions)—and hope they don't slip. Basically, the game is an excuse, for people of all ages, to excitedly climb and jump on furniture and other objects.

How is The Floor/Ground Is Lava used?

Although we will never know when "The Floor/Ground is ..." game was first played, British author Roald Dahl does feature a version of it in his 1948 short story "The Wish." The boy in the story imagines the red, black, and yellow colors of a carpet that he must cross, in order to get a puppy for his birthday, as hot coals (red), poisonous snakes (black), and safe steps (yellow):

You see, he told himself, I know how it is. The red parts of the carpet are red‐hot lumps of coal. What I must do is this: I must walk all the way along in to the front door without touching them. If I touch the red I will be burnt. As a matter of fact I will be burnt up completely. And the black parts of the carpet … yes, the black parts are snakes, poisonous snakes, adders mostly, and cobras, thick as tree‐trunks round the middle, and if I touch one of them, I'll be bitten and I'll die before tea time. And if I get across safely, without being burnt and without being bitten, I will be given a puppy for my birthday tomorrow.

The floor is lava 🔥🔥🔥 pic.twitter.com/tAnwBKFDn8

🔥⚽ The floor is lava! pic.twitter.com/w6KeSEJC1M