Otaku is a word we have been watching for a few years now. The term illustrates some of the difficulties in adding recent and specialized items of vocabulary to a dictionary, as it has shifted meaning and register over the last few decades to such an extent that establishing a precise definition is problematic. As scholar Yuji Sone wrote in an article for Cultural Studies Review in 2014 “It is a complex and elusive term that addresses varied practices and fandom-related activities.” 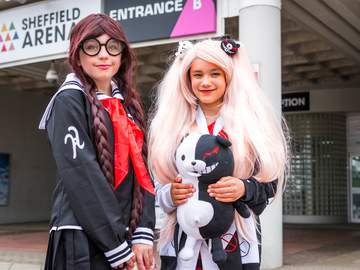 Some feel that 'otaku' carries the sense of “reclusive and potentially dangerous,” while others think it could mean “mostly harmless and quirky.” In truth, the word's meaning has shifted multiple times in recent memory.

The word is borrowed directly from Japanese, and in English use tends to refer to a person who has hobby-related interests that might be regarded as obsessive, particularly in the fields of anime and manga. It is similar in some fashion to earlier senses of geek and nerd (there is a perception that otaku are single-minded enough in their pursuits that they avoid leaving the house), although many people feel that it has a far more negative connotation. Otaku are often perceived as a group to be possessed of poor social skills, although, as with many other aspects of the word, this perception is shifting.

The word is used primarily as a noun (“an otaku”) in English, although it may also be found as an attributive noun (“an otaku man”). The plural form of otaku in English is generally the same as the singular, although otakus will sometimes be used.

In Japanese, otaku may function as a formal second person pronoun, and also has the meaning of “house.” When it added the meaning of “obsessive enthusiast” and began to be applied to the subcultures of anime, manga, and computer technology, the word had a strongly negative meaning in Japan. There is evidence, however, that the Japanese connotations of otaku are becoming less pejorative, at least based on English writing in Japanese publications in recent years.

But you also cannot say there is no media coverage favorable to otaku. There are reporters, including myself, at each newspaper company who openly admit they are otaku, and present reports full of their otaku tastes in their papers.
—Makoto Fukuda, The Daily Yomiuri (Tokyo, Japan), 19 Sept. 2008

She said she has been to mixers, but "'carnivore' type men are always talking about themselves. They're all bluster and don't listen to others. Otaku men seem more down-to-earth and earnest." She said she is not necessarily into anime and games but doesn't agree with the common characterization of otaku as being "creepy" or "nerdy."
—Fumi Matsumoto, The Nikkei Weekly (Tokyo, Japan), 2 Jul. 2012

We first begin to see evidence of otaku used in English in the early 1990s, although it often seems that the word is being used in a non-naturalized fashion, in which the writer indicates through the use of quotation marks, italics, or explicative asides that the word belongs to a different language.

"Otaku" sounds kind of perverted. I hate that word. [Note: "Otaku" is a word for someone who stays indoors all the time, for example playing video games.]
—post by John Leo, rec.games.video, 10 Oct. 1990

The series also became fodder for the "otaku" boom. "Otaku," as they are called, are obsessive fans who pour all their energy into obscure pursuits, whether collecting Barbie dolls or hacking computer networks.
—Dana Lewis, The Los Angeles Times, 21 June 1992

So is the use of otaku derogatory, or is it inoffensive? Both senses may exist simultaneously, depending on the speaker, the audience, and the intent in which it is used. When words change meaning they generally do not do so in a sudden fashion, but will instead take on new shades, which can overlap and occasionally conflict with earlier ones.

A splendid example of this may be found in the history of one of the words that is nearly synonymous with otaku, which is the aforementioned geek. This word, which has in recent decades shifted its meaning from “a person often of an intellectual bent who is disliked” to “an enthusiast or expert especially in a technological field or activity” began its life with a different set of fairly objectionable meanings.

In the late 19th century geek was used to refer to “a dupe, a foolish person.” In the early 20th century it came to refer to “a carnival performer often billed as a wild man whose act usually includes biting the head off a live chicken or snake.”

By the middle of the 1930s, we see geek being used, in the same year, to refer both to a circus performer and to someone of intellectual bent.

”I was a geek,” he explained. A geek is any of the strange individuals, wild men or wild women who appear with the snakes in carnivals.
—San Francisco Chronicle, 20 Jan. 1936

In this column May 25, 1936, I invited readers who might suggest a suitable word to convey the idea of that superior state or health to submit their ideas. If any geek has a word for it, a word I can use in this column and elsewhere, I declared, the word would be with $25 to me.
—William A. Brady, Daily Illinois State Journal (Springfield, IL.), 5 Sept. 1936

There remains a certain amount of disagreement on the meaning and politeness of otaku, which is hardly surprising when one considers that many of the people who self-define with this word are strongly interested in genres and highly particular fields of popular culture. When it's used in English, some view it as being rightfully applied to those whose interests are exclusively concerned with pop culture, while others expand it to include technology. Some feel that otaku carries the sense of “reclusive and potentially dangerous,” while others think it could mean “mostly harmless and quirky.”

It serves as a reminder that a word may be used in different locations with different meanings, may have different senses for different people, and may indeed be used by the same person to have shades of meaning depending on how they feel that day. In other words, this is a reminder that language can be a messy thing.

MORE TO EXPLORE: 17 English Words that Come From Japanese