October surprise—“a revelation disclosed in the month prior to an election, often orchestrated in the hopes of dramatically influencing the result” has fast become one of the most reliable members of our stable of political terms. This year is no exception, as both candidates appear to be viewed as potentially prone to damaging late-breaking disclosures:

Many Trump supporters are currently in a rage because these candidates won't merely attach themselves to Mr. Trump's candidacy. But that is hard to do when every few days the mercurial Mr. Trump is producing a personal October surprise or midcourse policy correction.
—Daniel Henninger, The Wall Street Journal (Europe, Brussels), 14 Oct. 2016

And even though recent polls and surveys show Sanders supporters largely rallying to Mrs. Clinton, it is not enough to create any sense of security, Ms. Boshart said, that an October surprise of hacked data or a hidden pool of misogyny and rage do not still lie in wait.
—Kirk Johnson, The New York Times, 19 Aug. 2016 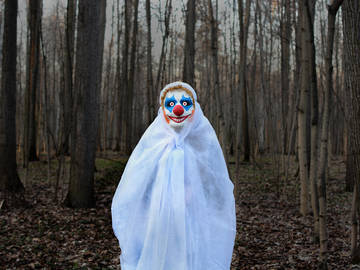 'October surprise' has been a political term since at least 1980, when people began using it to describe last-minute election year revelations. But the history of the term is a surprise in itself.

Given how well established October surprise seems to be in our political vocabulary, it might... surprise some to learn that it once had another use, one that has been entirely supplanted: it described annual autumn clothing sales in department stores.

The fine showing that J. H. Harris is now making of the newest Fall wearables for all members of the family is really an October surprise, as every department is stocked to overflowing with just the kind of goods the people of this city and vicinity want.
—Corvallis Gazette-Times (Corvallis, OR), 20 Oct. 1911

Every October, for seven decades or so, newspaper advertisements would make mention of an October surprise sale, until suddenly (and fairly recently) the term took on a distinct political meaning. This appears to have begun in 1980 (a few months before October), as the campaign between Ronald Reagan and Jimmy Carter was heating up, and Reagan’s team became concerned that the incumbent president would find benefit from some unforeseen and dramatic event.

The biggest fear in Ronald Reagan’s inner circle is that President Carter will get an unexpected boost in the campaign from an “October Surprise.” Reagan’s advisers worry that a startling news development like last year’s “November surprise,” the Tehran hostage seizure, would rally support around a beleaguered president….Meanwhile, Reagan is working on a “July surprise” of his own for unveiling at the Detroit national convention.
—Jack Anderson, The Washington Post, 10 Jun. 1980

Ronald Reagan said Friday that he is gearing up for a mud-slinging campaign against him by President Carter and an “October surprise” designed to bolster the President’s reelection prospects.
—William Endicott, Los Angeles Times, 26 Jul. 1980

In addition, Reagan and his aides fully recognize Carter's power as an incumbent. They expect him to pull what they call "the October surprise," meaning that shortly before Election Day, he will inflate the importance of some overseas event in an attempt to rally the country around him.
—Frank Merrick, Time, 28 Jul. 1980

Campaign ’80 finally produced its “October surprise” last week and the most surprising thing about it was that it had nothing to do with the American hostages in Iran. That was reserved for November.
—Alan Baron, Los Angeles Times, 2 Nov. 1980

The concept of an October surprise certainly existed prior to 1980, as political campaigns have long been aware that damaging information about an opponent revealed just before an election is of far greater power than were it was disclosed six months earlier. Considering that the term has been in use for but several decades, it has proven to be remarkably successful, to the point that we are now considering it for inclusion in our dictionary. The sartorial sense of the word may not receive its own definition, as it has become almost entirely obsolete. Barring some unexpected linguistic shift in our political discourse, the current sense of October surprise seems destined to make its way both into the dictionary and into the pantheon of political buzzwords.