To make or repair with what is on hand 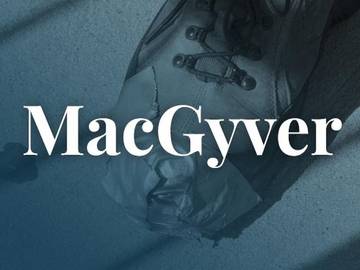 What does MacGyver mean?

MacGyver is a verb meaning "to make, form, or repair (something) with what is conveniently on hand."

Where did MacGyver come from?

MacGyver (pronounced \muh-GHYE-ver\) is the name of an action-packed television show that ran from 1985 to 1992. It was subsequently syndicated for a time and even adapted into a movie, followed by a television series reboot in 2016. The eponymous protagonist, whose first name is Angus, is a secret agent (played by mullet-haired American actor Richard Dean Anderson in the original version) who uses his ingenuity and encyclopedic knowledge of science to get himself out of predicaments and to defeat the "bad guys." Episode after episode, MacGyver uses whatever items are available to him—often simple ones, such as a paperclip, chewing gum, or a rubber band—to improvise a way to escape a sticky situation or to make a device to help him complete his mission. He always has his Swiss Army knife and some duct tape on hand, too—just in case.

How is MacGyver used?

Regular viewers of the show were drawn to MacGyver's ingenious thinking and improvised methods and contraptions. Eventually, people began associating his name with making quick fixes or finding innovative solutions to immediate problems. Early evidence of the verb MacGyver goes back to the 1990s, but it was likely used colloquially in the late 1980s.

To fix something without benefit of tools or a manual is called "to MacGyver a solution," after the television show in which Richard Dean Anderson disarmed nuclear bombs with paper clips.
— Stephen Lynch, The Orange County Register, 1 Aug. 1997

Prosthetic specialist Kevin Carroll travels the country tackling the toughest human amputation cases, so it was only natural that he was also drawn to Winter—the only known dolphin to survive the loss of her powerful tail flukes. "My heart went out to her, and I was thinking I could probably put a tail on her," said Carroll…. [A]fter months of experimenting, Carroll and a unique team of experts are well on their way to, as one of them puts it, "MacGyvering" a tail for Winter.
— Phil Davis, The Inland Valley Daily Bulletin (Ontario, California), 26 Aug. 2007

The star of CBS's action reboot MacGyver has a mother who's a chemist and a dad who's in the U.S. army, so playing a government operative who uses unconventional—and sometimes unbelievable—methods to save lives comes naturally. "We used to call my dad MacGyver because he would hijack all my class projects and do them for me, so it's kind of crazy that I got the part in the show," says [Lucas] Till. Based on the like-named series starring Richard Dean Anderson, which aired from 1985 to 1992, MacGyver builds on the franchise so embedded in pop culture that the name MacGyver has become a catch-all verb. Have a leaky faucet that you fixed using duct tape and silly putty? You just MacGyvered your way out of a flooded bathroom.
— Melissa Hank, The Simcoe Reformer, 27 Sept. 2017

Soon after the show's debut, MacGyver also came to designate any person who has a knack for invention or problem-solving using limited resources.

Early-day MacGyvers in the Middle East, India and China were making crude fireworks and bombs around the year 1130.
— Brenda Herrmann, The Chicago Tribune, 29 June 1993

Another related word is MacGyverism, which refers to MacGyver's improvised techniques and inventions. The word was likely coined by someone affiliated with the production of the original version of the show.

Also, [Stephen] Downing enjoys the TV series he is producing, partially because it is less violent than the average hero-villain show. MacGyver applies scientific techniques to ordinary items to escape impending doom for himself and others. He relies on his ingenuity and knowledge, rather than violence, to complete dangerous missions. … [Downing] calls the use of science techniques "MacGyverisms."
— David R. Francis, The Christian Science Monitor, 24 Dec. 1987

The -ism noun suffix is used to form verbs that end in -ize, and usage evidence can be found online of MacGyverize in reference to making something using a method similar to MacGyver's—for example, someone might MacGyverize an antenna from a coat hanger and foil. MacGyverize is inventive but apparently not compelling since it is infrequently used.