Let Me Google That For You 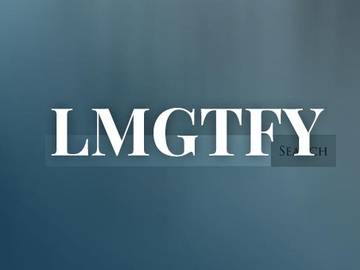 What does LMGTFY mean?

LMGTFY stands for "let me google that for you."

Where did LMGTFY come from?

If you get a message with LMGTFY, be warned that the messenger is probably not very happy with you. Everyone googles (and they are pretty sure you can, too), so why ask someone to google something for you when you (who obviously have internet access because your ask is often via social media) can do it yourself?

But there are kind people out there, and if you ask a question whose answer can be found in a simple internet search, you might receive a polite response—with a snarky preceding or following LMGTFY.

We'd be remiss if we didn't mention that should your friend, colleague, or acquaintance have a question about words and their history and usage, and you don't know a Merriam-Webster lexicographer, feel free to use LMMWTFY ("Let me merriam-webster that for you") and find your answer at merriam-webster.com.

If you haven't already googled the origin of Google, as in the company's name, uh, LMGGFY? According to Google's own website, "Google is a play on the word googol, which was coined by Milton Sirotta, nephew of American mathematician Edward Kasner, and was popularized in the book Mathematics and the Imagination by Kasner and James Newman. It refers to the number represented by the numeral 1 followed by 100 zeros."

How is LMGTFY used?

Does anyone know if you can get an iPhone camera lens replaced? Mine has somehow smashed. God knows how. I have looked online before I get LMGTFY...! It seems half possible? @iSmashUK