The sesquipedalian librocubicularist is the name for a person who reads books in bed. The first syllable of the word is based on Latin liber, which originally denoted the inner bark of a tree, and later came to be used for a sheet of papyrus used for writing before acquiring the additional senses of "book, volume, long document" and "a division of a long literary work" (and, yes, it is the source of library and librarian). 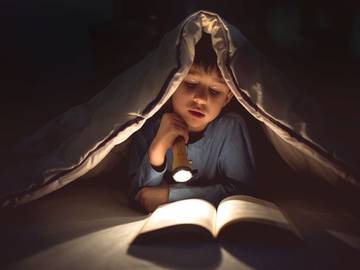 The word is considered a creation of Christopher Morley in his 1919 novel 'The Haunted Bookshop.'

Another etymological element of librocubicularist is Latin cubiculum, meaning "bedroom," which itself is from cubare, "to lie" or "to recline" and from which English cubicle is derived. Print evidence suggests librocubicularist was checked into the English language in the early 20th century, and it has yet to check out:

Here's something I didn't know about my wife, Julie, before I married her, she's a librocubicularist. There is no known cure, but that's OK because a librocubicularist is someone who reads in bed.
— Arvid Huisman, The Des Moines (Iowa) Register, 25 July 2018

The word is considered a coinage by American writer Christopher Morley. In his novel The Haunted Bookshop, published in 1919, a bookseller suggests to a Miss Chapman that she take a book up to her room and read it in bed (if she wants), and then questions, "Are you a librocubicularist?" Miss Chapman is taken aback by the word, but another character, Helen, chimes in: "He only means you are fond of reading in bed. I've been waiting to hear him work that word in the conversation. He made it up, and he's immensely proud of it."

Reading books, whether consisting of sheets of paper or virtual pages, under the sheets is a relaxing activity, and a good way to decompress after a busy day. We don't think librocubicularists themselves will become extinct, but we're crossing our fingers that the cognomen librocubicularist survives. It doesn't exactly roll off the tongue, but it is a serendipitous find in one's reading.