A fan of the rap duo Insane Clown Posse 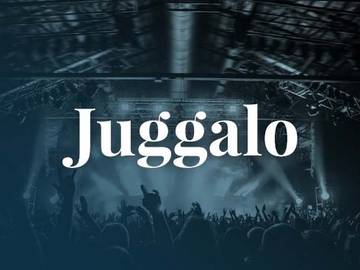 What does Juggalo mean?

A Juggalo is a fan of the rap duo Insane Clown Posse, also known as ICP.

Where did Juggalo come from?

Like the members of ICP, Juggalos often wear black and white clown makeup. The name is reportedly linked to the band's 1992 song "The Juggla," but the term Juggalo didn't start appearing in mainstream news publications until the late 1990s. Female Juggalos are sometimes referred to with the term Juggalette, a name that appears to be almost a decade newer, at least in mainstream publications.

How is Juggalo used?

Welcome to the Insane Clown Posse's Dark Carnival, a celestial circus of lunacy, madness and excess that travels through time and space to distort pleasant, youthful memories into a horrific living nightmare. The Posse's All-Up-In-Your-Face Tour rolled onto Cleveland's Nautica stage Sept. 6. A near sellout crowd of ninjas and juggalos (otherwise known as fans) showed up for the show.
— Jodi Elizabeth Giera, The Plain Dealer (Cleveland, Ohio), 8 Oct. 1997

Mostly, the packed house of Juggalos—fans who are indeed down with the clown—seemed content to bask in the constant sticky rain of foam and Faygo during Shaggy and J's creative cursing seminar. A crew of dancing ghouls and psychopathic clowns tossing around buckets of root beer didn't help the show gain momentum.
— Gregory Scott, The St. Louis Post-Dispatch, 13 Feb. 1998

Not many terms for fans of a particular musician or band appear with enough frequency in widely read publications to qualify for dictionary entry. The term Deadhead ("a devoted fan of the Grateful Dead") is in this dictionary, but Jimmy Buffett's Parrotheads (or Parrot Heads), Justin Bieber's Beliebers, and members of Beyonce's Beyhive aren't mentioned. Whether Juggalos make it in remains to be seen.