And what exactly does it mean?

The Internet is not known for its good manners, but the barbarous hordes do not rule all. Along with the abundant anonymous nastiness there is also the genteel and unassuming abbreviation h/t (also styled HT or ht). It means "hat tip," and it harks back to a time when fedoras adorned not the heads of hipsters but those of fathers, husbands, brothers, and sons. A tip of one's hat was a signal of greeting, recognition, respect. The modern h/t is likewise a gesture of civility. 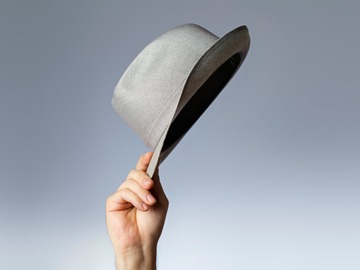 The h/t is most at home on Twitter, where it's used to tell the people your followers that something you're tweeting about was brought to your attention by someone else:

The h/t is especially well-suited to Twitter for two reasons: brevity — essential when you can only use 140 characters — and function. Much of Twitter is about finding and sharing interesting stuff on the Internet, but it's not kosher to give the impression that you're the discoverer of content that someone else led you to. The h/t is a way of acknowledging a source. You didn't stumble upon the interesting article on your own; someone steered you to it.

While Twitter is the place you're most likely to see h/t, its former primary domicile — and still a significant alternate residence — is the virtual land in which it was born in the early aughts: the blogosphere. By the end of the decade it was making appearances on major news websites.

We don't know how old hat tipping itself is, but cartoonist Jimmy Hatlo may have been the first to put the idea to figurative use. Hatlo was known for giving a "Tip of the Hatlo Hat" to the readers who contributed the ideas he based his "They'll Do It Every Time" comics on. Hatlo expressed his appreciation for ideas for all the years his comic ran (1929-1963), but the earliest evidence we've seen of the phrasing that included the hat tip explicitly — "Thanx and a Tip of the Hatlo Hat" — is from 1962.

In the 1980s a hat tip could mean "homage," as when a musician's performance of a particular song is a "hat tip" to the person best known for the song. Or it could be a synonym for shout-out, as when a public figure is given a "hat tip" in an organization's newsletter for an action that benefits the organization. Or it could mean "appreciation" or "thanks," as when a sports club owes a "hat tip" to a team for bringing fans to a game. But its online meaning today is quite narrow and specific — and very similar to Hatlo's. It now almost always expresses gratitude to a person or publication who's brought something to the writer's attention — suggesting that the Twitter use of h/t may have shaped current use of hat tip in general.