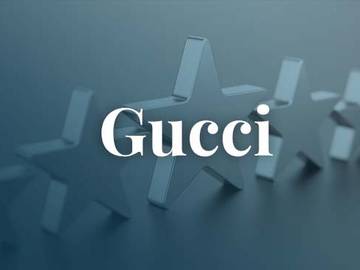 What does Gucci mean?

Where did Gucci come from?

The luxury brand Gucci is one of the most famous in the world. Its symbol—two linked G's—adorns purses and shirts and the like the world over. These days the brand's name is seeing some use as an informal term with a variety of meanings that range from "good" to "great," along with some "fashionable" or "fancy" use in there too.

Not surprisingly, the "fashionable" meaning is likely the oldest: currently, the earliest evidence we've found of this use of Gucci is from the September 1999 issue of Harper's Bazaar, in which singer Lenny Kravitz describes his very stylish liquid-blue bedroom as "very Gucci."

How is Gucci used?

Fashionable or fancy things are still being described with the word:

I thought seeing the last Jedi at the super Gucci theater was next level. Clearly I need to up my fandom game! Astronauts Just Watched 'Star Wars: The Last Jedi' in Space! https://t.co/hsP1nIQHFc

So my super gucci givenchi versace slippers make my feet hurt I'm sad bc I use them all the time...

But these days gucci most often means "good, fine" or "great, excellent":

My header is pretty Gucci

if i had a male version of me, life would be so gucci

The word's auditory similarity to good lends it to playful constructions where it replaces the more common word:

My capn crunch tastes so gucci, cuz my milk so icey.

Weekend Reminder: Be yourself, and don’t care about what other people think about you, ignore them if they’re being mean to you about it, and everything will work out if you’re just being yourself. 👌 #gucci #eighthgrade pic.twitter.com/WACTUZTd77