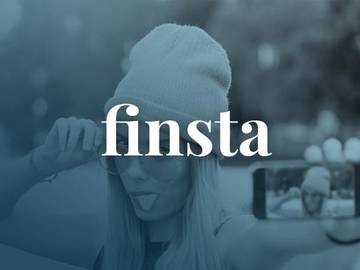 What does finsta mean?

Finsta is short for Finstagram, or “fake Instagram,” referring to an account made so that a user can post images and interact with other accounts in a more private way, usually reserving the account’s followers to close friends.

Where did finsta come from?

Instagram started in 2010, and by 2015 this distinction between “real Instagram” and “fake Instagram” was already being observed. The images on a finsta are those that users don’t want associated with their own name or public account, often to hide activity from parents, partners, or schools. It can also provide them anonymity. They are sometimes called “spam accounts,” presumably because they generally have very few followers.

How is finsta used?

"Teens are now not just checking and maintaining one Instagram account a day, they are consistently monitoring and updating two accounts, their rinsta and their finsta - one public and open for any acquaintances they may meet and one for just close friends. Finsta gets rid of the stressful element of Instagram, but in a familiar environment.”
— Eric Herber quoted by Sophie Morris, The Independent, 23 September 2015

(It’s logical enough that, in order for there to be a finsta, there must also be a rinsta, but finsta is much more frequently used.)

Their fake-Instagram (their finsta) is a second Instagram account reserved for their close friends. With low follower numbers (followers are usually kept in the low double figures), they use this account to share more candid pictures of their lives – often wilfully unattractive ones, pulling faces and the like.
— Lara Williams, The Guardian, 26 September 2016

Finstas can also act as a safe space for teenagers to share how they’re really feeling with a select group of followers.

“Teenagers have private accounts for the not-so-perfect parts of their lives,” says Dr Lishman.
— Angela Tufvesson, The New Daily, 29 October 2016