What Does 'Canvass' Mean?

Yes, it's related to the word 'canvas'

The campaign season is upon us, which means that you'll find plenty of people canvassing your neighborhood. The verb has a number of meanings, but there's one that sees quite a bit of use when the politicians are out. 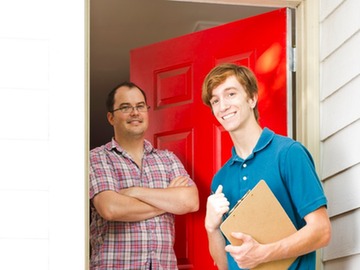 The verb form of 'canvas' first referred to the process of tossing a person or animal around in a canvas sheet, either as punishment or for fun.

This meaning of canvass refers to campaigning in a district or to specific people in an effort to get that district or person to support a particular candidate:

But his path in aiding Mr. Sanders so far has been uphill, Mr. Gudiño-Rosales said. He has knocked on about 140 doors—but nearly every Latino voter he has canvassed, he said, has asked the same question: "Who is Bernie Sanders?"
—Yamiche Alcindor, New York Times, 16 February 2016

Wondering whether the "survey" canvass has anything to do with the "thick woven cloth" canvas? It does, in a very roundabout way.

The verb canvass first appeared in written English in the early 1500s as a descendant of the noun canvas. The transition from noun to verb was pretty literal: the verb first referred to tossing a person or animal around in a canvas sheet, either as punishment or for fun. Shakespeare used it in Henry VI, Part I: "I'll canvas thee in thy broad Cardinal's Hat, If thou proceed in this thy insolence."

From there, the verb came to refer to throwing someone or something around, or subjecting someone to attack or assault, both literally and then figuratively. The figurative sense was used of attacking a person in writing, or criticizing them heavily.

This is the seed that led to the senses that have to do with examination: in order to criticize someone or something properly, you must thoroughly examine it, and when you critique, you discuss. While the more literal, early uses of canvass waned into obscurity, the "examine" and "discuss" senses grew. In fact, they're still in use today.

But how did we get into politics? In the early 1700s, the "examine" sense of canvass was applied very specifically to votes: votes that were canvassed were examined for authenticity. Once canvass was applied to the political realm, it dragged its "discuss" meaning with it. Nowadays pollsters are as likely to canvass public opinion as campaigners are to canvass voters.